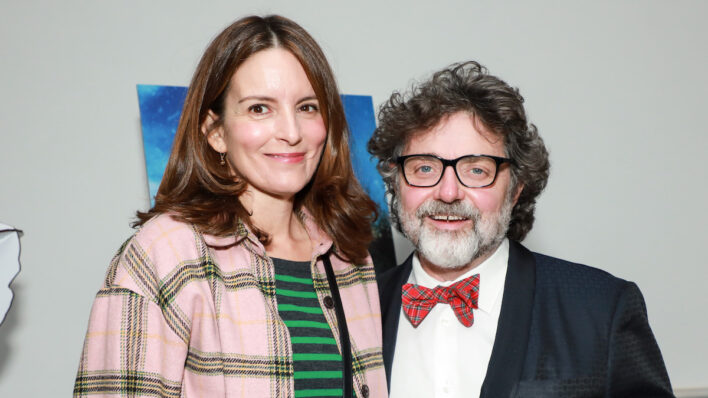 Richmond has called their marriage “borderline boring — in a good way.”
By Barbara Pavone    December 16, 2021

Richmond has called their marriage “borderline boring — in a good way.”

Tina Fey knew “almost immediately” that Jeff Richmond was the perfect partner for her. The couple met in the early ‘90s in Chicago and it was a shared sense of humor and passion for performing that swiftly brought them together.

The year was 1993 and Richmond was working as an in-house pianist at Del Close’s ImprovOlympic Theater. He had studied music theory and composition at Ohio’s Kent State University and befriended “the theater students [because they] seemed to be having all the fun,” he told the New York Post. Soon enough, they all moved to The Windy City and started their own theater while Richmond played piano to pay the bills. Little did he know that his side gig would introduce him to his future wife and forever change his career.

During his time at ImprovOlympic Theater, Jeff Richmond was “the guy sitting there at the piano watching everybody audition.” One day, Tina Fey and Amy Poehler came in and, as he told the New York Post, they “were among the very best.” Not surprisingly, they got the gig and soon enough, Fey and Richmond “started hanging out offstage. “Tina always made me laugh,” the musician recalled, sharing how “she used to eat a lot of chocolate cake in those days, and she’d black up one of her teeth during conversation.” It was “very funny and very, very adorable” and Richmond was smitten, but he joked that Fey only fell for him because he was “the only one who was getting paid back then, so I could pick up the check.”

In reality, they bonded over a shared appreciation of comedic duo The Jerky Boys, as well as the soundtracks of Guys and Dolls and The Music Man, per Thrillist. According to Vanity Fair, they fell in love “quickly” after an outing to Chicago’s Museum of Science and Industry one Sunday afternoon. “We walked into a model of the human heart,” Fey quipped.

They started dating around 1994 and tied the knot in 2001 before welcoming daughter Alice in 2005 and her sister, Penelope, in 2011. Along the way, they managed to balance their blossoming careers with their love life without having to compromise on one or the other. A rare feat indeed.

Throughout their seven years of dating, Tina Fey and Jeff Richmond continued to pursue their personal work goals while staying dedicated to one another, even when they lived in different states.

Following their time together at the ImprovOlympic Theater, they went on to be colleagues again, this time at Chicago’s The Second City where she was performing and he was musical director. That was in 1995 and, just two years later, Saturday Night Live offered Fey a job in New York, which she accepted. Meanwhile, Richmond chased his own dreams, taking on the role of director at The Second City in 1998. They visited one another regularly, but it wasn’t until 2001, when Richmond got the opportunity to take on the role of SNL musical director, that the two were finally reunited full-time.

Whereas the distance may have been too much for some couple to withstand, Fey and Richmond had no trouble keeping their love alive thanks to their unconditional support — and trust. In fact, those two traits were what made the comedian fall for Richmond in the first place. Speaking with Women’s Health, she recalled meeting him when she was just 24 and he was 33. “It was actually a really great age difference because he was much more mature than someone my own age,” she explained, reminiscing how “there was no game playing or ‘I’ll call you tomorrow.’ It was a very easy, respectful relationship from the beginning, and it very quickly and easily became quite solid.”

Noting that she “grew up in a very stable home,” Fey said she doesn’t like “a tremendous amount of conflict” because “I don’t think that fighting and passion are the same thing.” Richmond, whom she called “the most patient man and very supportive,” was able to provide her that stable union and they thrived as a couple.

It was that trust and support that helped ensure fame didn’t wreak havoc on their relationship. As Richmond told Vanity Fair, even when his partner became a household name and was catapulted into the spotlight, it never caused any issues between them. Saying he never worried about “adultery” or “messing around,” Richmond shared how Fey “sticks to her principles more than anybody I’ve ever met in my life. There’s not a lot of gray area in being flirty with somebody. She’s very black-and-white: ‘We’re married, you can’t,’” he explained. Jeff even called their marriage “borderline boring — in a good way.” Fey concurred. As she told the outlet:

I don’t enjoy any kind of danger or volatility. I don’t have that kind of ‘I love the bad guys’ thing. No, no thank you. I like nice people.

Once Tina Fey and Jeff Richmond were both living in New York and newly married, their professional collaborations continued. First, Richmond composed music for 30 Rock, including its theme song, and he also executive produced the show, directed a handful of episodes, and even made cameo appearances as Alphonso Disperioso. Then, he composed for and executive produced Unbreakable Kimmy Schmidt and, as Fey told Women’s Health in 2007, she always enjoys working with her hubby because “I really trust him.” Noting that they “met in a work environment,” she enthused about their time together at ImprovOlympic Theater, The Second City, and SNL, saying, “It was nice because we were able to work at the same place but not in the exact same job.”

In 2015, Fey looked back at 14 successful years of marriage and shared her top advice with BuzzFeed, relaying something her mother-in-law told her before she tied the knot: “My only advice for marriage is don’t fuss too much.” Saying that wisdom is “so true,” Fey explained, “Sometimes if you’re not really mad about it, don’t make yourself mad about it because you think you should be. Like, who cares?!” It also doesn’t hurt that, as she told Glamour, she’s “a big Jeff Richmond fan” and always will be.

As Tina Fey and Jeff Richmond show us, a shared sense of humor can go a long way in a relationship. Even more important, however, is having an unshakable foundation of trust and support that allows both partners to prosper on their own, without forgetting about each other. Fey and Richmond were able to pursue their respective careers without any jealousy or drama because they could always feel secure in the fact that, no matter what, they would show up for one another and their “borderline boring” union when it mattered most.

True love Starts With Trust
“Being deeply loved by someone gives you strength, while loving someone deeply gives you courage.” – Lao Tzu
Tags
Share
← Prev Post Next Post →