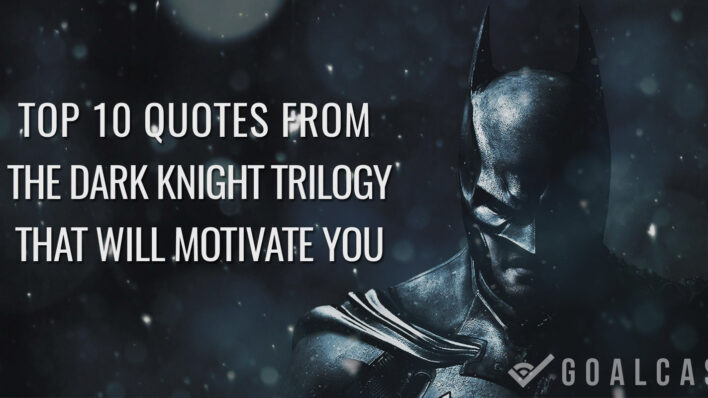 Among many things the Dark Knight Trilogy will be remembered for is its excellent script, unforgettable characters, gripping plots, and
By Cyrus    May 3, 2016

Among many things the Dark Knight Trilogy will be remembered for is its excellent script, unforgettable characters, gripping plots, and of course endlessly quotable lines of dialogue.

We’ve gone through all 3 films (Batman Begins, The Dark Knight, and The Dark Knight Rises) to bring you the very best motivational quotes. There were a ton of motivational lines, but for us, these were the ones that stuck out the most. The ones that hit us the hardest and instantly motivated  us to get out from our chair and do something extraordinary.

The night is darkest just before the dawn. And I promise you, the dawn is coming.

-Harvey Dent in The Dark Knight

Endure, Master Wayne. Take it. They’ll hate you for it, but that’s the point of Batman, he can be the outcast. He can make the choice that no one else can make, the right choice.

-Alfred  in The Dark Knight

“Why do we fall? So we can learn to pick ourselves back up.”

If you’re good at something, never do it for free.

-The Joker in The Dark Knight

“It’s not who we are underneath, but what we do that defines us.”

A hero can be anyone. Even a man doing something as simple and reassuring as putting a coat around a little boy’s shoulders to let him know that the world hadn’t ended.

-Batman in The Dark Knight Rises

“Your anger gives you great power. But if you let it, it will destroy you… As it almost did me.”

-Batman in The Dark Knight

If you make yourself more than just a man, if you devote yourself to an ideal, and if they can’t stop you, then you become something else entirely… Legend Mr Wayne.

I leave you with a bonus quote. It is actually from A Tale of Two Cities by Charles Dickens but it is beautifully quoted by Jim Gordon in the Dark Knight Rises:

“I see a beautiful city and a brilliant people rising from this abyss. I see the lives for which I lay down my life, peaceful, useful, prosperous and happy. I see that I hold a sanctuary in their hearts, and in the hearts of their descendants, generations hence. It is a far, far better thing that I do, than I have ever done; it is a far, far better rest that I go to than I have ever known.”