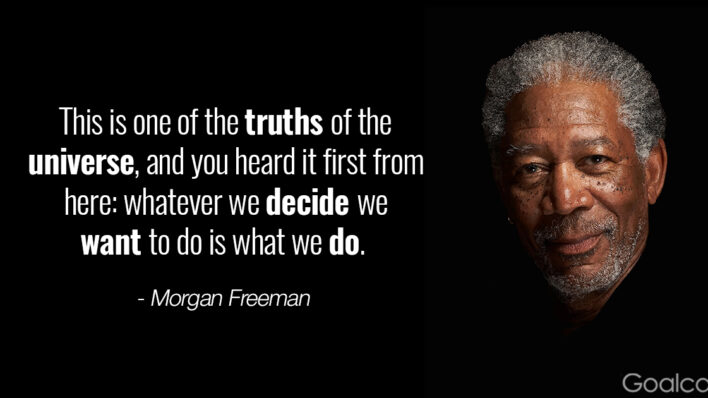 For Academy Award-winner Morgan Freeman, it was a long road towards becoming one of America’s most accomplished and respected actors.
By Goalcast    September 12, 2017

For Academy Award-winner Morgan Freeman, it was a long road towards becoming one of America’s most accomplished and respected actors. The star of such critically acclaimed films as The Shawshank Redemption and Million Dollar Baby was raised in a poor black family in the Jim Crow-era South, the youngest of five children born to a barber and a schoolteacher. So from there, it was far from an obvious path towards delivering an Oscar-nominated performance as Nelson Mandela in the 2009 film Invictus. But then, Freeman knows a thing or two about defying the odds.

An actor, director, producer and voice-over narrator, Morgan Freeman has starred in dozens of films and garnered numerous honors and awards, including lifetime achievement awards from both the Golden Globes’ Hollywood Foreign Press and the Screen Actors’ Guild. In 2016, Freeman’s decades-long contribution to American culture was recognized with a National Medal of Arts, bestowed by President Barack Obama.

Here are our Top 20 Wisest Morgan Freeeman Quotes to Inspire You to Aim Higher. Was I always going to be here? No I was not. I was going to be homeless at one time, a taxi driver, truck driver, or any kind of job that would get me a crust of bread. You never know what’s going to happen.

The best way to guarantee a loss is to quit.

When you have made your choice, it is providence that is your guide. Good, bad, or indifferent. Your fate lies in that.

I can say that life is good to me. Has been and is good. So I think my task is to be good to it. How do you be good to life? You live it.

One of the things you can always depend on – this is one of the truths of the universe, and you heard it first from here – whatever we decide we want to do is what we do. As long as you feel like a victim, you are one.

If you live a life of make-believe, your life isn’t worth anything until you do something that does challenge your reality.

Don’t be different just for different’s sake. If you see it differently, function that way. Follow your own muse, always. If you wake up and the snow is knee-deep outside, you are not filled with rage. It’s just something that you’ve got to cope with. If you’re living in a situation it’s the only situation that you know, and you’ve got to deal with it.

We humans are more concerned with having than with being.

If your life turns out to be good and you have a tremendous amount of luck in your life, it’s a good thing to turn around and make it work for others.

I once heard a wise man say there are no perfect men. Only perfect intentions.

If you want to see a miracle, be the miracle. Learning how to be still, to really be still and let life happen – that stillness becomes a radiance.

How do we change the world? One random act of kindness at a time.

Never let pride be your guiding principle. Let your accomplishments speak for you.

Challenge yourself; it’s the only path which leads to growth.

Very often, you know, you stop walking because you say, ‘Well, I’m tired of climbing this hill. I’m never going to get to the top.’ And you’re only two steps from the top.