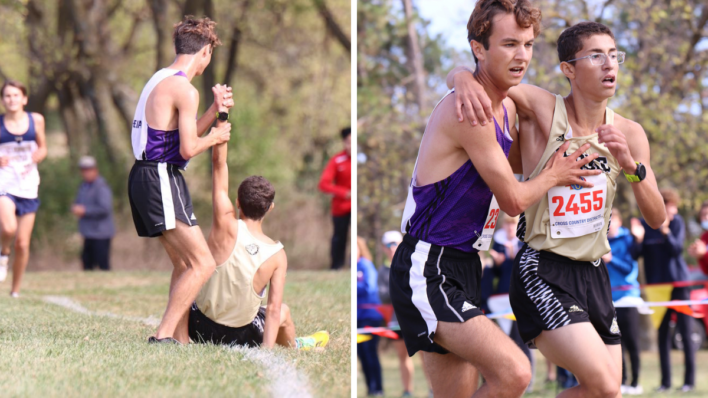 Runner Blake Cerveny’s legs gave out right before the finish line of a race. Unexpected help came in the form of his competitor.
By Joel Balsam    December 26, 2021

Runner Blake Cerveny’s legs gave out right before the finish line of a race. Unexpected help came in the form of his competitor.

Collapsed 400 meters before the finish line

Track and field runner and Omaha Burke High School sophomore Blake Cerveny was on a mission.

Cerveny got a fast start in the 3.1-mile race and was hoping for a personal best to qualify for the upcoming state meet. But with less than 400 meters to go, the runner’s legs cramped up and he fell to the ground.

“My legs gave out on me and I fell to the ground and just my hands hit,” he told KETV.

He refused to give up

But Cerveny refused to give up. He got up to continue the race only to fall again after 150 meters.

The team’s coach called from the sidelines, “Are you ok?”

Blake nodded his head in reply, as reported by Prep Running Nerd.

But Blake wouldn’t give up.

Fellow runner Brandon Shutt had actually been in the same position as his competitor three weeks prior when he wasn’t able to complete a race.

So when he noticed Cerveny was down, without a moment’s hesitation he attempted to help him over the finish line.

At first, Shutt couldn’t get Cerveny to stand up, but he persevered and the two athletes crossed the finish line together.

“This is the first time I’ve ever seen an athlete stop his race and work so hard to help his fellow competitor across the finish line,” Prep Running Nerd author Jay Slagle told Good News Network. “Perhaps more impressively, Brandon had virtually no time to think about whether he should help or not; he reacted so quickly that he did it instinctively.”

As per the rules of the race, Cerveny was disqualified for not completing it on his own, but Shutt’s time stood, therefore sacrificing his chance at qualifying for the state meet.

“Brandon is an excellent person,” the team’s head track coach Rachel Carraher told KETV. “He is really kind and a great leader on the team.”

“I really appreciate what he did and I’m going to remember that.”

In life and in sports, we’re taught to be competitive. “Win at all costs,” they sometimes say.

But a world with only competitiveness and compassion is a mean, mean world.

In this race, Shutt showed compassion and selflessness, which despite not winning the race are more valuable in the grand scheme of things than winning.

Lead with integrity
“If you don’t have integrity, you have nothing. You can’t buy it. You can have all the money in the world, but if you are not a moral and ethical person, you really have nothing.” — Henry Kravis
Tags
Share
← Prev Post Next Post →