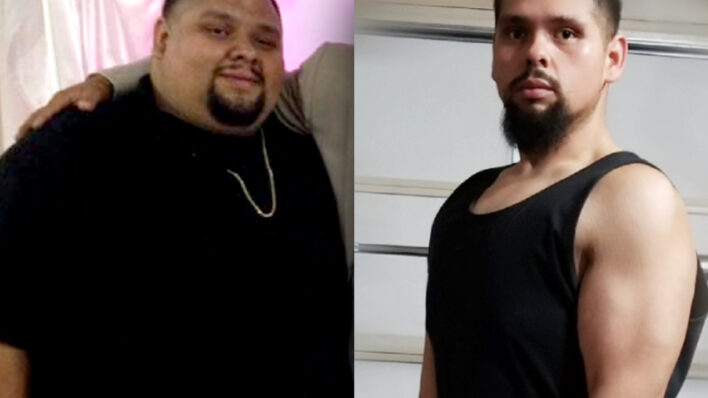 Jonathan Coronado found out he was a match to be a kidney donor for his then 13-year-old sister, only he was too overweight to qualify.
By MJ Kelly    August 19, 2019

Jonathan Coronado found out he was a match to be a kidney donor for his then 13-year-old sister, only he was too overweight to qualify.

When Jonathan Coronado found out his little sister, Denise, needed a new kidney, he became determined to help.

Jonathan found out he was a match to be a kidney donor for his then 13-year-old sister, only he was too overweight to qualify. At the time, he weighed 365 pounds.

Jonathan had always been what he considered a “big boy”

After watching Denise get routine dialysis for four years, he found the motivation to lose weight, both for her and for himself.

“I would never look at myself in the mirror,” the 31-year-old told TODAY. “We took a picture at my wedding and my wife posted it on Facebook and I got upset because she posted it… I didn’t know I was that big.”

Jonathan began his transformation journey by paying close attention to what he ate, and slowly started eliminating soda, cookies, and bread from his diet.

“I learned as I went,” he said. “The more I lost weight the more I got confident and doing more workouts. (Healthy) diets just became a habit.”

Wanting to become more active, he set reasonable goals for himself and started walking around a local park.

In the first six months of his journey, Jonathan crushed his original goal.

Feeling energized to see that his efforts and consistency paid off, he only became more driven to keep challenging himself.

“I felt like I needed to lose more, so I just re-adjusted my diet and calorie intake,” he said.

Jonathan also began weight lifting and added more cardio to his fitness routine, while watching what he ate.

He lost another 60 pounds and felt healthier than ever, but was told he needed to lose a bit more to be considered a donor for Denise.

“I went all the way down to 195 pounds and that’s when I was eligible for donation,” Jonathan said.

On September 10, 2018, Jonathan donated his kidney

He was able to return home the next day. Denise’s recovery wasn’t as swift but today, she is a straight-A student and won a scholarship after scoring high on a standardized test, all thanks to her older brother.

“It was life changing for her. She started to be more happy,” said Jonathan. “She is starting to go out and have fun and do the things she couldn’t do when she was in dialysis … It makes me happy to see her that way.”

He’s proud of himself, not only for having been able to give Denise a better chance at living a normal and healthy life, but also for simply being able to lose so much weight and keep it off.

“You have to really want to do it if you want to lose weight,” said Jonathan. “It was easy when I wanted to.”