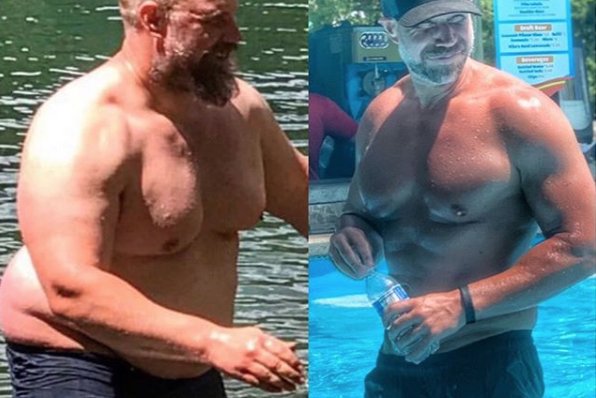 When a family hiking excursion left Jeremiah Peterson out of breath, he realized it was time to focus on his
By MJ Kelly    July 22, 2019

When a family hiking excursion left Jeremiah Peterson out of breath, he realized it was time to focus on his health.

“I remember being bent over heaving just trying to catch my breath,” Peterson, of Missoula, Montana, told People. “When I looked up, I saw my wife and three kids [10, 8 and 7] easily hiking, talking and laughing with each other — without me. It was a hard-hitting moment.”

“I felt sadness and shame in that moment thinking how I had let myself get to this, but so much deeper than that. If I continued to live like this, I would not live,” he continued.

Growing up, Peterson was an active kid and spent a lot of time outdoors, but at school he was bullied.

“In junior high, I made the decision to not get knocked around anymore,” he told Men’s Health. “I practically lived at the local Y lifting and shooting hoops. I chose then, at the age of 15, to get stronger and gain confidence within myself.”

Peterson loved sports so much that he got a degree in coaching and after graduating, he opened a personal training business in Scottsdale, Arizona, where he met his wife.

After they got married and had they first child, they decided to move back to Montana, where they opened an antiques shop.

His passion for fitness fell to the wayside

Peterson became absorbed with running the family business. On a typical workday, Peterson often didn’t eat anything until he closed the store and it wasn’t until he got home that he had a few beers and his only meal of the day.

He stopped working out and the pounds crept on slowly until he reached his heaviest weight at 290 pounds.

“My desire to hike and fish, the very habits that I had created so many years ago, slowly disappeared into the process of building a life and a business,” said Peterson.

As soon as he got back home, Peterson started looking into weight loss options when he stumbled upon a video advertisement for a transformation challenge.

“[It] sealed the deal for me. I signed up knowing I was going to give this challenge every single thing I had,” he said.

After he found out he had a gluten intolerance, he decided to try the popular keto diet. Between his new nutrition plan and daily hour-long hikes, Peterson remembered feeling and seeing changes almost immediately.

He slowly started going back to the gym and began a weight lifting routine.

In total, Peterson lost 92 pounds during the 150-day transformation challenge and actually won the $50,000 grand prize.

He continues to document his weight loss journey on Instagram and hopes to inspire others who want to make a change.