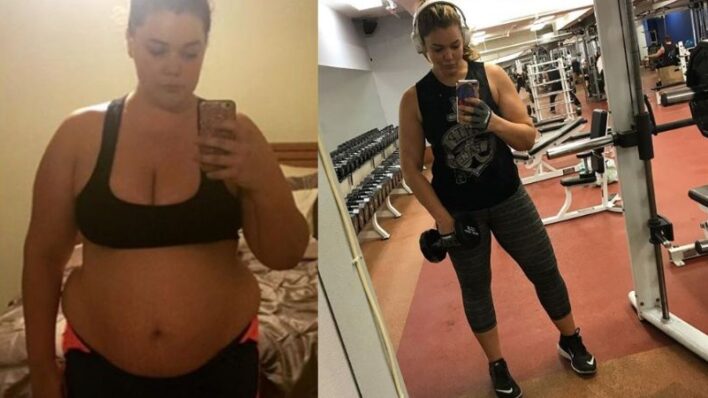 Justine McCabe became overweight after the loss of her mother and husband but decided to deal with her grief and get her health back on track.
By MJ Kelly    January 10, 2020

Justine McCabe became overweight after the loss of her mother and husband but decided to deal with her grief and get her health back on track.

Justine McCabe was overcome with grief after the passing of her mother and husband in the span of a year. As a result, she turned to food for comfort.

Within just a few months, she had gained 100 pounds. Her friends and family became concerned about her wellbeing after noticing how much weight she had gained. They nagged and pushed her to start exercising.

At her heaviest, the single mom weighed 313 pounds.

A challenge out of spite

Initially, Justine sought therapy to help her process the grief. It was not long before she felt ready to take up her loved ones’ challenge to get back in shape. She went to the gym “out of spite.”

She snapped a selfie of herself on that first day at the gym. Little did she know that she was laying the foundations of an inspiring transformation journey. “I didn’t like what I saw,” she told TODAY.

I feel like I look so broken and lost and sad and that’s the reason why I started taking a picture a day. I wanted to see myself change, see if my expression would change.

She traced her recovery through selfies

And change it did. As Justine became more active and documented her progress at the gym every day, she began to notice changes. Not only was she losing weight but she also realized that exercise was helping her deal with her grief.

“I would use that time to do a lot of thinking,” she said. “I was able to process some of the emotions I was dealing with that I would then go talk about and work through in therapy.”

After losing 124 pounds, she felt like she got a new lease on life. Justine took up new activities like hiking, kayaking, obstacle courses and returned to one of her favorite childhood pastimes, horseback riding.

And developed resilience in the meantime

Justine was fully immersed in enjoying the activities she could not have practiced before, until one day, while she was riding a horse in late 2018, the animal lifted and reared up, sending her straight to the ground.

The impact was so hard, it “blew out” her knee, but she was not prepared to let that get in her way. Despite the injury, she persisted in staying active and continued to push her limits. However, the pain in her knee eventually became unbearable.

“I kept saying, ‘No I’m fine. Keep pushing. This is what I do,’” McCabe explained. “I still wanted to seem like I was the same and I was so great.”

But she was not out of the woods yet

Eventually, she consulted with a doctor and found out that she had torn her meniscus and ACL. Surgery was an option, but still, she resisted.

Instead, McCabe continued with her vigorous workouts. As she “was never really letting [her] body have time to heal and recover,” she was eventually struck down with illness and diagnosed with fibromyalgia.

Forced to slow down her pace, she started to zero in on her health and became aware of her limits.

It’s so important to not sit and pretend that we are perfect, that we always have that same motivation and energy because it’s not (sustainable).

Acceptance is the starting point, not the end

“Things in life happen and we have to accept that,” Justine realized. After reaching that acceptance — of the loved ones she lost and of her medical diagnoses — she was able to start over.

Whatever we go through, acceptance is not the end of hardship. Rather, it is a new beginning, an opportunity to reconfigure our lives so we can start afresh and do things better.