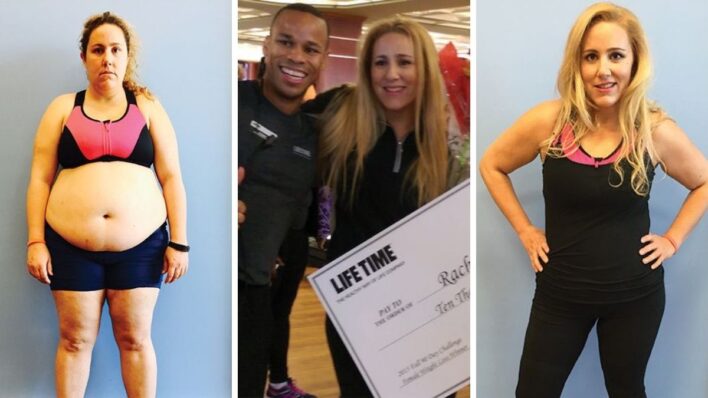 At 266 Lbs, She Took On a 90-Day Challenge And Completely Changed Her Life

Rachel Winston knew something had to change in her life. This one challenge was going to be her answer.
By MJ Kelly    November 13, 2021

Rachel Winston knew something had to change in her life. This one challenge was going to be her answer.

After struggling to conceive a second child and being diagnosed with infertility, Rachel Winston was determined to keep trying and began aggressive fertility treatment, but the process took a toll on her health.

When that didn’t work, she decided to undergo in-vitro fertilization cycles and met with over a dozen specialists across the country.

“Still, no baby. As if that weren’t hard enough, I also gained 120 pounds,” Rachel said.

It was an emotional rollercoaster and the process left her feeling frustrated and depressed, but she wasn’t ready to give up on herself, or her dream of expanding her family.

Following her doctor’s recommendation, Rachel was two years into her IVF journey when she decided to put a pause on her treatments to focus on her health and wellbeing.

“A lot of people said that it would take years to lose the weight, but I didn’t want to wait that long,” she said.

Rachel wanted nothing more than to give herself the best chances of having a healthy and successful pregnancy, so when she found out that her gym was hosting a 90-day weight loss challenge, she jumped at the opportunity.

I saw it as my chance. I weighed in for the contest at 266 pounds—by far the heaviest I had ever been.

Determined to get healthy, she changed her eating habits and started going to the gym six days a week.

During the first month of the challenge, Rachel’s weight dropped rather quickly until she eventually hit a plateau.

“I learned that I was eating too little, given all of my exercise,” she said.

“Knowing that I always had these healthy foods squashed my anxiety over the food aspect of losing weight,” she remembered.

She set herself the goal of achieving 30,000 steps a day through a combination of regular treadmill and free weight group classes. She also took up weight lifting to keep her metabolism up and prevent muscle loss.

Whenever she had free moments, she would walk and if she felt short of her steps goal by the end of the day, she jogged around her neighbourhood at night to reach her target.

Don’t give up, even if it seems hopeless

It was a lot of hard work and it wasn’t always easy. Rachel recalled texting her trainer one day, feeling completely overwhelmed ready to quit the contest. Instead of giving up, her coach recommended prioritizing sleep, scaling down her daily steps goal and prescribed a de-stressing practice, like yoga or pilates.

“I had to learn to relax to hit my weight-loss goals,” said Rachel.

Through perseverance and determination, Rachel lost 90 pounds by the end of the challenge and won a $10,000 prize.

I’m not going to lie, the money was awesome, but the biggest reward is feeling healthy and more like myself during the in-vitro process.

Rachel’s story proves the value of perseverance. Even when things seem impossible, the simple act of persisting can lead you to conquer mountains.

Keep going no matter what
“Success is the sum of small efforts, repeated day in and day out.” – Robert Collier
Tags
Share
← Prev Post Next Post →