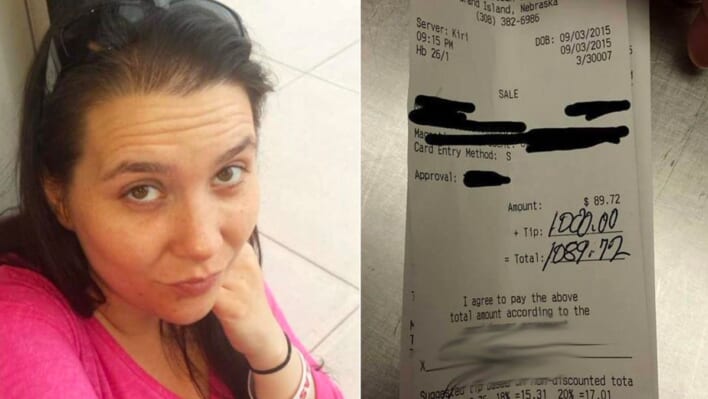 After chatting about family and finding out she was a single mom, a truck driver left his waitress a very generous tip.
By Sophie Tolias    November 8, 2022

After chatting about family and finding out she was a single mom, a truck driver left his waitress a very generous tip.

Kari Anthony, a bartender at Quaker Steak and Lube in Grand Island, Nebraska, was working an evening shift when a truck driver sat down at the bar, and they engaged in conversation.

The driver had just finished his shift and was spending the night at the truck stop near the restaurant, where he went for dinner and drinks.

A Trucker Shocks a Single Mom

“He was paying as he went and I let him know that he didn’t have to cash out every single time, and if he wanted he could put everything on a tab and cash him out at the end,” Anthony told the Grand Island Independent.

Soon the conversation deepened and the two discussed their love of family. Kari told the trucker she was a single mom with three kids, and he talked about his own beloved mother.

“I was really nervous and shocked,” Kari Anthony said to Grand Island Independent.

Completely shocked, Anthony told him he didn’t have to do that, but the driver insisted. Then she told her manager who spoke to the man for 10 minutes, making sure he wanted to leave the tip.

The Kindness Didn’t Stop There

Anthony later learned that the truck driver also paid the tabs of the customers he spoke to while seated at the bar.

The driver told Anthony to use the money to do something special for her kids.

RELATED: Single Mother Struggling to Get By Working as Bartender – Breaks Down in Tears When Handed $4,000 Tip

She had always wanted to take them to the Nebraska State Fair but could never afford it, so that’s where they went: “They got to go to the fair and play games and all the other stuff. Normally, because of situations, I would have not been able to do that. But I was able to because of that gentleman. I am just extremely grateful.”

The truck driver had the means and decided to spread generosity, brightening the lives of everyone he chatted with that night.

Imagine if we were all a little more like that.