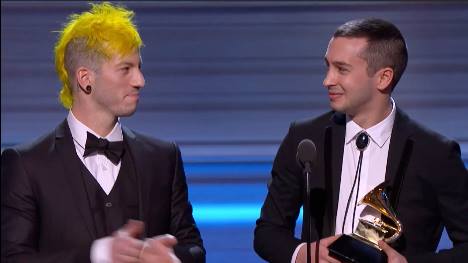 Tyler Joseph: Next Time It Could Be You

Tyler Joseph – You Could Be Next Listen to an inspiring and funny story shared by Twenty One Pilots’ frontman Tyler Joseph
By Goalcast    February 19, 2017

Tyler Joseph – You Could Be Next

Listen to an inspiring and funny story shared by Twenty One Pilots’ frontman Tyler Joseph about receiving a Grammy in his underwear.

It was before Josh and I were able to make money playing music. I called him up and I said, “Hey Josh, you want to come over to my rental house and watch the Grammys?” He said, “Yeah. Who’s hanging there?” I said, “Just a couple of my roommates just coming to watch the Grammys with us.”

As we were watching, we noticed that every single one of us was in our underwear. And seriously, Josh turned to me, and we were no one at that time, he turned to me and he said, “If we ever go to the Grammys, if we ever win a Grammy, we should receive it just like this.”

Not only is this amazing, but I want everyone who’s watching at home to know that you could be next. So watch out, okay? Because anyone, from anywhere, can do anything. And this is that.