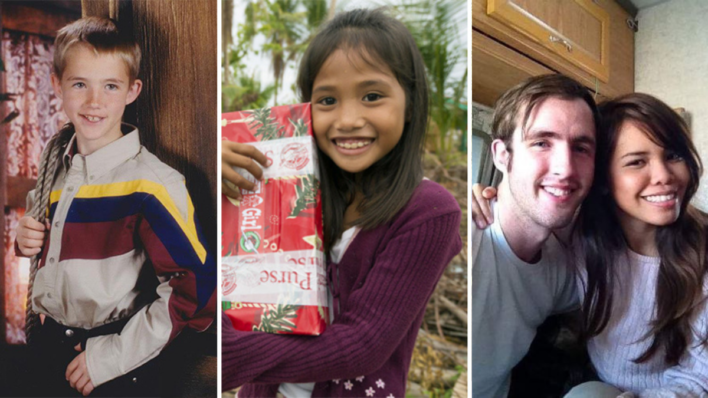 14 Years After Receiving Christmas Shoebox Gift, Woman Marries The Stranger Who Sent It

Fit for T.V but made for real life, this love-without-borders story is what holidays are made of.
By Bryan Liquor    December 22, 2021

Fit for T.V but made for real life, this love-without-borders story is what holidays are made of.

A gift from worlds away

Most love stories don’t begin with two kids on opposite sides of the globe, but this tale is in a class of its own.

It all began in Christmas 2000, when 7-year-old Tyrel Wolfe was helping his parents pack Christmas shoebox gifts for children in the Philippines. The project, headed by Operation Christmas Child through Samaritan’s Purse, consisted of packing school supplies, toiletries and small toys.

Each shoebox-packer was asked to include a photo of themself with their gift. And so, the boy sent a picture of himself decked in Western cowboy gear, and then was off into the sunset.

Over a decade later, at 21, Wolfe received a Facebook friend request from a Joanna Marchan. Thinking nothing of it, he ignored it.

Then two years, up popped another friend request from Marchan. With curiosity getting the best of him, Wolfe replied this time, asking how she knew him. Nothing could prepare him for her reply.

Marchan told him that she received Wolfe’s shoebox gift and picture, and how much she cherished it all those years. She added that she sent a thank-you note, however it got lost in the mail.

With that, the two began chatting and were drawn together like magnets. It was only a matter of time before the pull was too strong.

And so, after saving up enough money from work, Wolfe took bought a ticket to the Philippines for 10 days to meet Marchan.

He told PEOPLE that it was a leap of faith.

I knew I was taking a big risk. I had never traveled alone, let alone to a foreign country before and I was meeting people I didn’t know or even knew really existed.

A leap of faith

That was quickly put to rest when he laid eyes on her.

“When I finally got there and saw her, I had to punch myself a couple times because I thought it was a dream,” he recalled.

The chemistry was reciprocal. However, in respecting Marchan’s family tradition, the two couldn’t officially be a couple until receiveing her father’s blessing. When Wolfe finally had to return home, it was heartbreaking but only fueled his resolve.

It was one of the hardest goodbyes I’ve ever had to say because we didn’t know the next time we’d see each other. I told her I’m going to do whatever it takes to come back to her.

It wouldn’t be long. The two kept in close touch, planning their reunion. Finally, on a return trip to Manila a few months later — this time accompanied by his father Ivan — Tyrel got papa bear’s blessing to marry Marchan.

Have an open heart

The couple settled down in the United States because of Wolfe’s job, which also lets him help Marchan’s family back home.

As for Marchan, it’s all been alot to take in but she’s enjoying the ride with her beau.

“It was a big change and adjustment for me,” Marchan says. “I was raised in the city and now I’m living in the country with much less people and more space, but it’s a beautiful place.”

Wolfe and Marchan are keeping another commitment: Packing a shoebox every holiday season, including a note with their story.

We don t want to give them some fantasy, but we do want to show that we care and want to share our love.

Far from a fantasy, this incredible story teaches us that with an open heart and a little faith, there’s love and magic all around us.