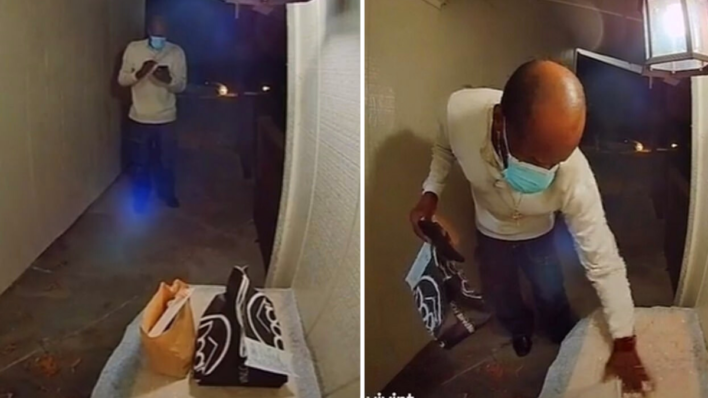 When an Uber Eats delivery driver’s 5-star sweetness was caught on camera; what followed was a touching story and an unforgettable gift.
By Bryan Liquor    April 20, 2022

When an Uber Eats delivery driver’s 5-star sweetness was caught on camera; what followed was a touching story and an unforgettable gift.

When it came to using food delivery apps, Tracey Ramirez and boyfriend Jonas Honea didn’t have much success.

“We’ve had not-so-great experiences in the past,” Ramirez told WLTX.

That would all change one night ordering Uber Eats, with a delivery they’d never forget.

How One Uber Eats Driver Delivered Much More than Food

Security camera footage showed the man at her porch, gently laying her order on tissue paper before taking a picture of it and leaving. When they opened the contents, nothing prepared them for what was inside.

It was a gift bag filled with water, candies, and a handwritten note. To top it off, inside was a poem, “Footprints in the Sand,” a story about persevering through hard times.

Ramirez was beyond moved.

I was emotional when I saw it. Shocked first and then emotional.

“Never had this type of experience, so yeah, I was pretty shocked,” Honea added.

The video quickly went viral with over 4 million views. Yet, only one person mattered. And after contacting the restaurant they ordered from that night, Ramirez found the delivery driver. His name is Donald Jackson Sr., and the story behind his 5-star gift bag is moving.

Jackson said he started leaving gift bags after he was diagnosed with congestive heart failure. He promised God that if he got better, he would do more to help others, which he says helped him.

All of that positive energy was filling me back up and I was feeling happy. I was like, ‘Ok, so the more I do for somebody else the better I’m gonna feel? Oh, it’s on!’

Ramirez and Honea decided to deliver Jackson a surprise of their own. And so, they invited him over for dinner and cooked something special for him.

There, with family and friends, Ramirez revealed that they created a GoFundMe for Jackson, and had raised over $6,000 for him. She then handed him her cell phone so he could enter his bank information to claim it.

This time, it was Jackson’s turn to be stunned.

I can’t put into words how much that meant to me.

On the gesture, Honea added, “I hope this makes him feel half as good as he made us feel.”

How a Man Proved Happiness is a Dish Best Served Warm

It’s amazing that it was crushing health news served as Donald Jackson Sr.’s motivation to serve others. Maybe, he thought about the meaning of life and realized it’s a little thing called love.

I just wanted to put a little hope in these people’s heart, a little joy in their soul, and a little peace in their minds, just for a good minute. That’s all I wanted to do.

If just one kind gesture that costs nothing touches millions, just imagine what we’re all capable of.

spread positivity
“Keep your face always toward the sunshine- and shadows will fall behind you.” – Walt Whitman