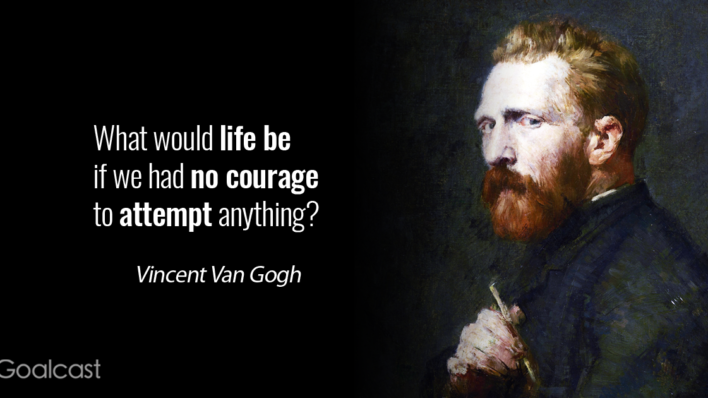 Van Gogh lived a short and tumultuous life and struggled with mental illness. During one of his seizures, he cut off his left earlobe after a fiery argument with Paul Gauguin, one of his fellow artists. It is said that later he offered it to a woman named Rachel, at a local brothel.

The attraction he felt toward troubled women whom he thought he could help, turned his love life into a total fiasco; the love he felt for others made him gave away his worldly goods to prove he is a good Christian. He lived desperately poor and lost his hope for human affection, so drawing and painting became van Gogh’s means of channeling his depression.

His work depicting figures, light, and landscape is notable for its beauty and emotion. Now, several of van Gogh’s paintings rank among the most expensive in the world. Ironically, he sold only one in his lifetime.

A great artist who had a way with words as well – here are 20 Vincent van Gogh quotes to help you find beauty in everything. Though I am often in the depths of misery, there is still calmness, pure harmony and music inside me.

It is looking at things for a long time that ripens you and gives you a deeper meaning.

In the end we shall have had enough of cynicism, skepticism and humbug, and we shall want to live more musically.

It is good to love many things, for therein lies the true strength, and whosoever loves much performs much, and can accomplish much, and what is done in love is well done.

The fishermen know that the sea is dangerous and the storm terrible, but they have never found these dangers sufficient reason for remaining ashore. If you hear a voice within you say ‘you cannot paint,’ then by all means paint, and that voice will be silenced.

If I am worth anything later, I am worth something now. For wheat is wheat, even if people think it is a grass in the beginning.

Someone has a great fire in his soul and nobody ever comes to warm themselves at it, and passers-by see nothing but a little smoke at the top of the chimney and then go on their way. What would life be if we had no courage to attempt anything?

…and then, I have nature and art and poetry, and if that is not enough, what is enough?

Great things are done by a series of small things brought together.

Normality is a paved road: It’s comfortable to walk, but no flowers grow on it.

I try more and more to be myself, caring relatively little whether people approve or disapprove.

I would rather die of passion than of boredom.

For my part I know nothing with any certainty, but the sight of the stars makes me dream.

I put my heart and my soul into my work, and have lost my mind in the process.

There is nothing more truly artistic than to love people.

The beginning is perhaps more difficult than anything else, but keep heart, it will turn out all right.

I often think that the night is more alive and more richly colored than the day.