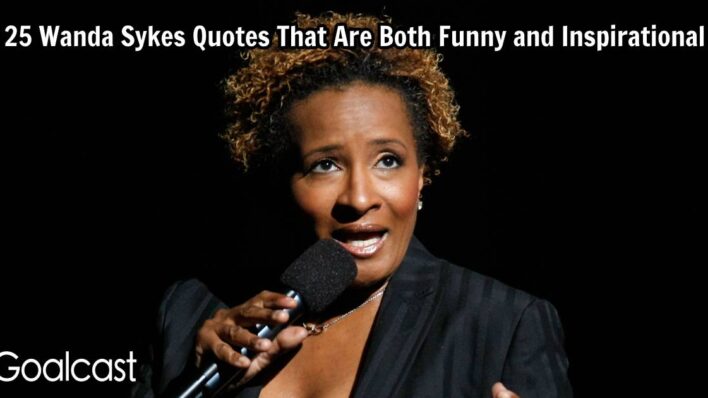 25 Wanda Sykes Quotes That Are Both Funny and Inspirational

Known for her sharp, edgy wit, Wanda Sykes is one of the best female comics out there. Here are 25 Wanda Sykes quotes that are both funny and inspirational.
By Flavia Medrut    June 1, 2020

Known for her sharp, edgy wit, Wanda Sykes is one of the best female comics out there. Here are 25 Wanda Sykes quotes that are both funny and inspirational.

Known for her sharp, edgy wit, Wanda Sykes has been doing stand-up comedy since the late 1980s. Over the years she appeared in various film and TV productions and now she is considered one of the best female comics out there.

However, she hasn’t always dreamt about becoming a comedian. In fact, soon after she finished college she took a job with the National Security Agency where she was in charge with the procurement of spy equipment.

Funny how life works — one day you have this serious job and the next you decide that stand-up comedy suits you better. Sykes took a chance at doing something that she really enjoyed and that was making people laugh.

Her first big break was as a writer and performer on The Chris Rock Show, where her outstanding writing on various topics was rewarded with a Primetime Emmy Award.

Sykes delivers her jokes in a forceful, yet charismatic way. Her audience simply loves her and she easily gets laughs, no matter what she is talking about during a show.

Here are 25 Wanda Sykes quotes that are both funny and inspirational:

I’m here today because I refused to be unhappy. I took a chance.

If you feel like there’s something out there that you’re supposed to be doing, if you have a passion for it, then stop wishing and just do it.

If something stinks, I say it stinks. But I try to massage it a little and not be as cutting, come behind it with a joke: Hey, I cut you deep, but now let me put a couple of stitches in you.

I don’t like the saying keep your friends close and enemies closer. I want my enemy on a different planet.

It’s easier to rip somebody to shreds while you’re making them laugh.

Mostly everything gets worse before it gets better.

As soon as you say ‘I do,’ you’ll discover that marriage is like a car. Both of you might be sitting in the front seat, but only one of you is driving. And most marriages are more like a motorcycle than a car. Somebody has to sit in the back, and you have to yell just to be heard.

But I think funny and talent will always win out; I mean, of course there are hurdles, but I think if you’re funny you will get over all of that.

Because if you don’t have that confidence in who you are then, if things don’t go the way you wish that they will, you know if people aren’t accepting then they can easily tear you down if you’re not prepared and comfortable with who you are.

I knew something was wrong with the economy when the shampoo girl at my salon closed on a six bedroom house.

My neighbor, she invited me to an Elvis party. I told her I couldn’t come ’cause I’d be too busy making fun of her from behind my blinds.

When my wife and I leave California, I want to have my marriage recognized in Nevada, Arizona, all the way to New York. How can you stop people from loving each other? How can you get upset about loving?

I work hard. The staff and crew see how much energy I put into this project, and it makes them step up.

Usually, there’s nothing being thrown toward the stage or at me. Then I feel pretty good about it.

I don’t understand why people really get upset about something that doesn’t affect them at all.

And then also I think it’s harder for women because comedy is so opposite of being ladylike.

You can’t make a woman happy. That’s like trying to cure a fatal disease. The goal is to treat the symptoms so you can comfortably live with the illness.

I think it’s because my comedy is in your face, and it comes from a place that’s real.

I’m like, If you do something dumb, I’ll write about it. If you put something out there, to me it’s like you’re kind of asking for it.

A woman would pitch a joke. Nothing. Then a guy would pitch it and everybody would laugh.

What drives the creative person is that we see it all.

I guess because of my act, people think that I say things they want to say, and that they can just come up and say anything to me.

It wasn’t until I became more confident with myself and I put myself forward instead of the jokes; at first it was put the jokes out there and I’m just behind the jokes.