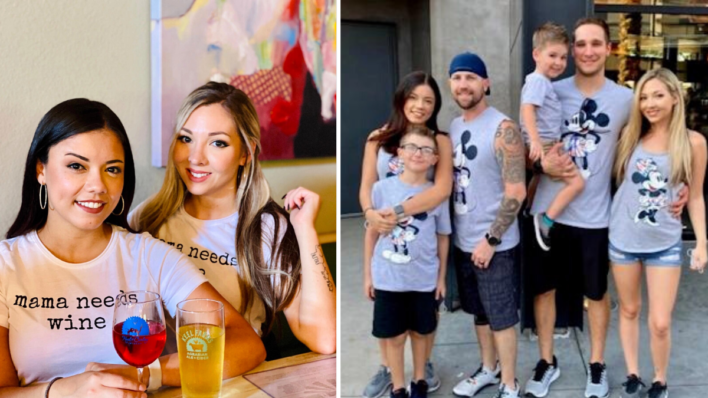 Two women who shared a husband and an ex-husband became best friends and raise their kids together.
By Amber Dowling    May 25, 2022

Two women who shared a husband and an ex-husband became best friends and raise their kids together.

They say it takes a village to raise a child. Tiffany Paskas and Megan Stortz put that theory to the test during the COVID-19 pandemic when they reached out to each other and became best friends, despite having a husband and an ex-husband in common.

This friendship wasn’t instantaneous. In fact, as Paskas recently told Good Morning America, the duo didn’t actually speak to each other for years when they first met. “It was four years that it took before we even talked – I mean four years of awkwardness – not saying anything besides quick little, ‘Hi,’” Paskas told the publication.

You see, Paskas is married to Stortz’s ex-husband. Although Stortz and the man share custody of their son, Michael, it was difficult for the now 11-year-old to adjust to going back and forth between two houses.

“He didn’t want to express that he was having a good time at each household because he was just worried about upsetting the other house,” Stortz explained to GMA. “And that was 100 per cent one of the reasons why I reached out to [Tiffany] because I saw that firsthand and was like that’s not okay.”

We just didn’t know it was okay to talk.

“We just didn’t know it was okay to talk,” Paskas also told CBS. “We were under the impression, being children of divorce, that the ex and the new [partner] never intermingle, so it was like, best to stay away,” she continued. “So that’s kind of how we dealt with the first four years.”

At first, Stortz started off small. She sent Paskas a bottle of champagne and a card that thanked her for being a positive influence on her son’s life. Then, the women began to send gifts back and forth.

“Just testing the waters. Because again, we didn’t have any sort of drama, it was just indifference and we didn’t know. So just testing the water here and there,” Stortz explained to CBS. “I would start to text her about things with school, because that’s when COVID happened too, [and] when we all had to homeschool a couple years.”

RELATED: Family Notices Lonely Elderly Man Eating Alone – What They Do Next Inspired an Entire Restaurant

We didn’t have any sort of drama, it was just indifference and we didn’t know.

Eventually, both Stortz and Paskas decided to quarantine together after their husbands got COVID at the same time. That’s when their friendship really took off. “We had a great time,” Stortz explained to GMA. “We did a lot of TikTok together originally on my makeup account, which is what was the reason why people were questioning, they’re like, ‘Who’s this other person on your TikTok?’ And I’m like, ‘Oh, it’s my husband’s ex-wife.’ And they were like, ‘Oh my God, you need to tell us more.’”

Why Two Moms Are Spreading the Message of Togetherness

So they did. From there the duo created Moms of Tampa on social media and a podcast called From Blended to Besties. Their goal is to spread messages of togetherness and attempt to inspire other parents and step-parents to find common ground and come together to co-parent their own blended families.

“We had so much in common,” Paskas revealed to CBS. “I mean, we started talking about makeup and we were just like, hitting it off and we were like, ‘Oh my god, we love the same brands. We love doing the same things.’ We were testing out wines together and then testing out new, different makeup products and just kind of talking to each other about it.”

RELATED: Mom Notices UPS Driver Leave a Message on Her Door Cam – What He Said Changed both Their Lives

We understand that it can’t be done for everybody – [but] if you could put your pride aside it could be done.

“It can be done. We get so many people who are like, ‘I could never’ and it’s…you really could though,” Stortz added. “We understand that it can’t be done for everybody – [but] if you could put your pride aside it could be done.”

Learning to Communicate and Making an Effort Can be Inspiring

Families come in all shapes and sizes, and what works for one family may not work for another. That’s why it can be important for blended families in particular to find common ground and learn to communicate. Sure, it could be difficult getting to know an ex’s new partner, but you may have more in common with that person than you think.

RELATED: 8 Orphans Almost Lose Their Home – Until Their Community Steps in with a Breathtaking Save

Of course, not all parents and step-parents are going to be besties like Tiffany Paskas and Megan Stortz. But this duo is inspiring because they reached out and tried. If you have an ex who is married to someone new and there are kids involved, just getting to the point where you could all have coffee may be something to aspire to. But the first step, at least according to this story, is to just reach out. Make the first move, put aside your pride and remember why you’re doing this in the first place: the kids.

After all, the saying is that it takes a village. But the saying doesn’t specify who has to be in the village you surround yourself with.

make an effort
“There is no such thing as a perfect parent. So just be a real one.” – Sue Atkins
Tags
Share
← Prev Post Next Post →