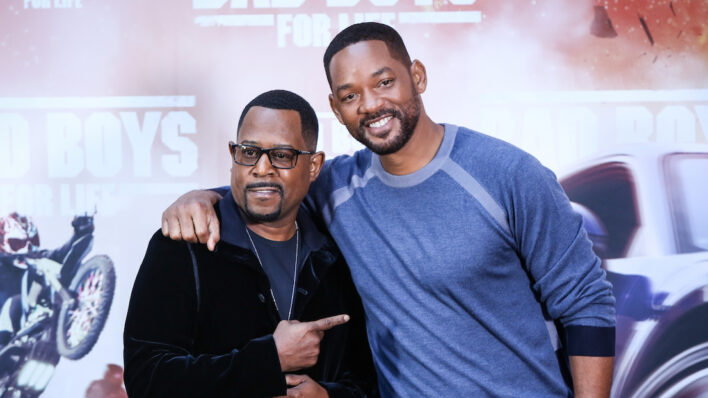 Why Will Smith’s Friendship With Martin Lawrence Changed His Life

Will Smith and Martin Lawrence’s friendship resisted the test of time but the former’s career would not be where it is today without the latter.
By Leah Kosatsky    January 23, 2020

Will Smith and Martin Lawrence’s friendship resisted the test of time but the former’s career would not be where it is today without the latter.

Sometimes, we watch a movie where the two costars have so much chemistry that we think “Oh they act well together on set.” Such is the case of Will Smith and Martin Lawrence, who made their debut as a duo in the 1995 movie Bad Boys.

Yet, these two have a different sort of bond that goes beyond onscreen chemistry. Their friendship is the “real deal” but it all started with Bad Boys. Now, 25 years later, they reunite onscreen one last time in Bad Boys for Life, honoring the place where it all started for these two comedians.

However, Will and Martin were not brought together by a simple gesture of Hollywoodian fate. Rather, their bond was precipitated by no other than Martin himself, who helped propel Will Smith into the superstar that he is today. Without him, Will may not have reached the rest of the world…

Before they even knew each other…

At the time, both Will and Martin were successful in their own television series–Will with The Fresh Prince of Bel-Air and the latter with Martin. They were both already familiar figures to the public.

When the original Bad Boys was in production, Martin was cast before Will. They were looking for the right costar, as much of the success of the story depended on the two leads. But what brought the two costars together?

As Martin told Ellen Degeneres in December 2019, his sister suggested Will Smith to him.

My sister… she brought Will to my attention. So, I called Will, and we set up a dinner and Will came to my house. Five minutes after talking to Will, he got the job.

They instantly connected and it was not for nothing. Director Michael Bay even allowed Will and Martin to improvise certain scenes together, which have led to some of the memorable, iconic moments in the movie.

Bad Boys went on to be a hugely successful film, garnering immense commercial success. Their onscreen chemistry left a lasting impression on so many, which is no surprise that two other sequels were made. Will himself admits that to this day, this is the one movie that still has his fans talking.

Will Smith to Heavy.

However, at the time, Hollywood was no necessarily open to the idea of two black men leading a blockbuster film. The untold story behind

Martin helped Will against all odds

Bad Boys was originally written with two white leads in mind, actors Dana Carvey and Jon Lovitz, with the original title being Bulletproof Hearts. Of course, 1995 was a different time in Hollywood, and it was more difficult for black actors to forge their careers.

Will acknowledges that Martin’s interference was a pivotal moment for his career, but also for the world of cinema.

At the time, two black leads it like ‘ehh’ … Martin [Lawrence] fought to have me in Bad Boys, and the big part of the original success was because, after that, [producer] Don [Simpson] and [producer] Jerry [Bruckheimer] refused to let it be a black movie. They fought the studio and said it’s not a black movie.

Will Smith to Heavy.

Martin fought to have Will Smith on board. In doing so, he helped destroy barriers in Hollywood and prove wrong the “perception essentially that black people can’t sell movies globally” or that “black films don’t travel.”

What has Martin been up to?

Martin’s level of success was not on Will Smith’s and his life took a slightly different turn in the years following the release of the first Bad Boys movie. In 1996, he was arrested for “hurling obscenities at cars” while carrying a gun and in 1999, he suffered from heat exhaustion, which put him in a coma for 3 days.

The 90s and early 2000s were not a good time for the actor but he definitely grew from that period.

His journey was one of change and growth but it happened mostly behind the scenes. “Wait a minute. I don’t want to be a failure,”he told GQ. “I don’t want to blow this.” I’m a kid from the hood and I’ve made it all the way to Hollywood, and I’ve got my hands and feet imprinted in Hollywood and don’t want to go down negatively. I want to be held up positively.”

From this realization, Martin managed to get to a better place. He returns to audiences with Bad Boys For Life, with his long time friend, Will Smith. He even has a stand-up comedy tour starting on January 31st 2020.

It is hard to image the cinematic world without Will Smith. Yet, while Will was huge on television in the 90s, thanks to The Fresh Prince of Bel-Air, he was not yet familiar to film audiences. When Martin brought him on Bad Boys, he jumpstarted what would become an immensely successful career in Hollywood.

However, their friendship lasted all this time and was not solely fabricated for the screen. “Will is one of my good friends,” Martin confided to New York Times. “I could call Will about anything, and he could call me about anything.”

Their return onscreen for Bad Boys For Life, 25 years after the original film, was not without a fair share of concern. Yes, they have remained friends offscreen but that didn’t mean that their onscreen chemistry would be the same.

However, that seemed to be no issue.

We hadn’t really done anything for 25 years so there was a little concern [over] the chemistry. But literally the first moment on stage it was right back.

Will Smith to Ellen

How helping each other makes a difference

Will and Martin have charmed millions around the world as Mike Lowrie and Marcus Burnett. Behind the scenes, their bond has been just as genuine. They share an unbreakable bond. It is friendships like these that instill hope into the hearts of all people, old and young.

Their instant connection helped them overcome the limitations of a discriminatory film world and we are thankful for it. Otherwise, we may not have the Will Smith that we know today.

Martin took a chance on Will, but it paid off both in their careers and their personal life. It is important not to ignore genuine connections when they happen on our path. Listening to our instincts and what feels right always leads to fruitful and long lasting relationships.