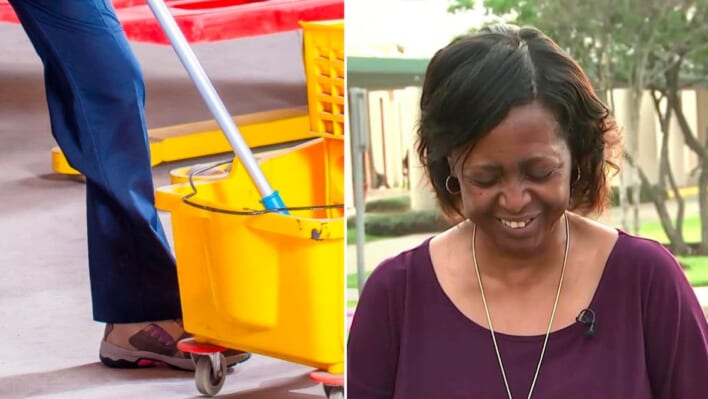 Wanda Smith is living her dream…but the journey to get there was far from easy.
By Heidi Hamm    November 3, 2022

Wanda Smith is living her dream…but the journey to get there was far from easy.

Wanda Smith always knew she wanted to be a teacher. But then…life happened. Her mother became ill just after Smith graduated from high school and she had to defer college to look after her and her younger sisters.

A husband, 3 kids, and nearly 20 years later, Smith decided it was now or never.

Even though she was already juggling her family, a sick mother, AND working to make ends meet, she enrolled in night classes. She was 37 years old.

It would take 9 years, the loss of her mother and sisters, and quitting multiple times before she finally walked across the stage to get her diploma. Three decades after graduating high school, at the age of 47, she graduated with a Bachelor of Science.

How the Former Janitor Finally Made Her Dream a Reality

In order to provide for her family, Smith worked around the clock as a school bus monitor and a janitor for the Brenham Independent School District in her hometown of Brenham, Texas. She woke up at 6 am for her job as a bus monitor, came home to care for her kids and mother, and then worked as a custodian from 3 – 11 pm.

“Sometimes I didn’t get to sleep. I never really thought about it, I just did it because it had to be done,” Smith told TODAY.

After years of sacrificing her own dreams for the sake of others, Smith finally decided it was her turn. She enrolled at a local college where she earned her associate degree.

RELATED: School Janitor Walks to Work for a Sad Reason – So His Students Give Him a Gift That Makes Him Cry

Then a year later, in 2004, she enrolled at Sam Houston State University. Her path wasn’t easy and she faced a lot of adversity along the way, including the devastating deaths of not only her mother but both of her sisters as well.

However, Smith fought through with a lot of hard work, dedication, and grit. And her husband Darren and their 3 kids supported her, every step of the way.

They were there, cheering her on, the day her dream finally became reality. After years of attending night classes, Smith graduated with the class of 2010.

She Started Out as a Janitor, Today She’s a First-Grade Teacher

Smith returned to Brenham Elementary School. But this time, instead of cleaning a classroom, she was heading it — as a first grade teacher. Her journey had come full circle.

More than 10 years later, she remains devoted to her students and her community.

“When I stand in front of my classroom, I am living my dream,” she told Jenna Bush Hager on TODAY.

RELATED: An Elementary School Janitor Just Became Its Principal – How He Did It Is Unbelievable

In 2021 she was recognized for her unwavering dedication during Teacher Appreciation Week.

School principal Kim Rocka told TODAY, “Wanda Smith is the portrait of an American teacher. She’s such an inspiration to us all.” The school gifted her with a commemorative schoolyard bench. Additionally, Sam Houston State established a $500 scholarship in her name.

Brenham’s mayor, Milton Tate Jr, also got in on the action. Using one of Smith’s own signature lines, he officially declared May 4, 2021 as “Be the Best You Can Be” Wanda Smith Day.

What a Janitor Turned Teacher Can Teach All of Us

“Never give up.” This is the mantra that Smith lives by and that she teaches to her students. Smith’s journey from custodian to teacher is a lesson in perseverance and never, ever, giving up on your dreams.

So many of us think that once we reach a certain age, we have to let go of our dreams. That it’s too late to follow our passions. But age really is just a number and there is still so much more living left to do. It’s never too late.