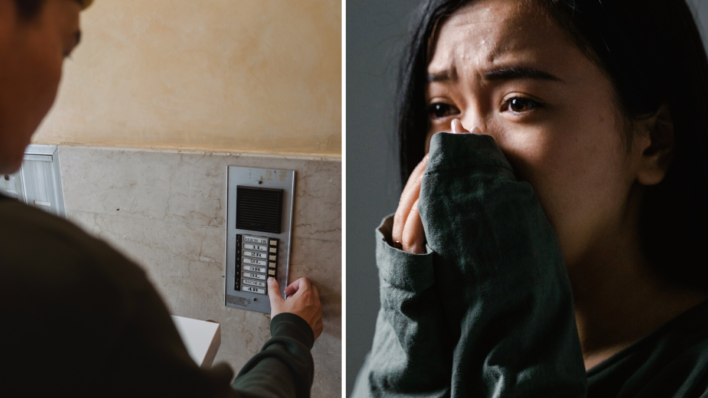 After a scary delivery experience, one woman decided to do something about it, potentially saving other women.
By Amber Dowling    September 15, 2022

After a scary delivery experience, one woman decided to do something about it, potentially saving other women.

Many of us rely on food delivery services for a quick bite or easy dinner — especially over the past couple of years following pandemic-related shutdowns. So when one woman ordered herself a pizza while her boyfriend was out of town last year, she didn’t think twice about it.

How a DoorDash Delivery Driver Made a Customer Uncomfortable

Roughly 10 months ago, in a Reddit’s True Off My Chest post titled “I got a delivery driver fired,” the woman shared her story.

“Last night, I ordered a pizza as my boyfriend was out of town, and I was feeling lazy. An older gentleman delivered the pizza and started saying things like, ‘Are you wearing anything under your clothes?’ ‘Do you live alone? Is anyone in your apartment?’ and ‘I like you; you’re very sexy,’” she recalled.

“Right at the end, he tried to hug me and kissed me on the forehead. I was wildly uncomfortable, and I kept waking up to car sounds in the parking lot, checking that it wasn’t him. I slept with a bat.”

After her sleepless night, the woman decided she needed to do something about the delivery man’s poor behavior. She figured if he spoke to her that way, he was probably harassing other women as well.

“I do not like to rock the boat. I’m very non-confrontational,” she continued in her post. “But I reported him to DoorDash. They just called and told me they are so sorry, there is a zero-tolerance policy on that sort of behavior, and they have deactivated his account.”

RELATED: 8 Months Ago, He Was A 39-Year-Old DoorDash Driver – Today, He’s A Pro Golfer

In the end, the woman feels like she did the right thing, but she also feels guilty about it. She wondered if maybe he had a bunch of kids or he’s retirement age and just trying to feed his family.

“I’m glad I reported him. He might have done something worse in the future to another woman. But I feel like trash that I got a guy fired. Weird dissonance in my head right now,” she concluded.

In the comments — that wildcard space where trolls so often hang out — the woman received a surprising reaction: support. Many backed her up by saying she did the right thing and to remember it was the driver who was in the wrong, not her.

“Just think of it this way, You saved other women from going through the same frightening experience as you had or even saved a woman from getting raped or killed in the extreme. You did a good thing and shouldn’t feel guilty,” one user wrote.

In a fantastic story of unity, some other women shared their own stories of uncomfortable situations and how they had to report the men who made them feel bad.

“You’re absolutely right,” the original woman responded in the comments. “I am used to creepy men, but I never put my foot down; this is the first time, and it feels so good. Because I know that something could have happened to me (I’m not out of the woods yet, still gotta keep my head on a swivel for a while) and potentially other people he dropped food off to. It isn’t sensitivity, it’s logic.”

How One Woman Proved a Moment of Bravery Can Save Lives

As the commenters in this story show, many people out there think they have a right to say or do whatever they want to another person, even if it makes them uncomfortable or is downright inappropriate. However, there are many more people out there who are interested in doing the right thing and backing up others who are in those situations.

This woman shared her story because she felt terrible about getting someone fired, even though she was in the right. And a group of strangers came together not only to cheer her up but to share their own stories and let her know she’s not alone.

It’s a cool reminder of how the internet isn’t such a bad place all the time, but it also highlights the importance of listening to and supporting the people in your life. If you have a friend or family member who has gone through something similar, supporting them with kind or encouraging words can go a long way.

And if you have found yourself in that kind of situation, this community is a reminder that it’s okay to stand up for yourself and to report it. If it’s happening to you, odds are it’s happening to others, but it takes a brave person to speak their truth and stop that unwanted behavior from affecting others.