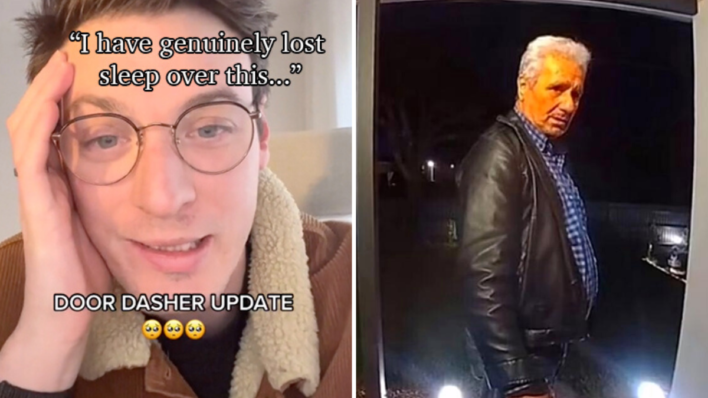 Mark Polchleb was determined to set things right after a huge DoorDash misunderstanding.

We all make mistakes and sometimes we do things we don’t mean to do. But it’s how we react to those situations and try to fix things that truly showcases character and kindness. An Australian man named Mark Polchleb was recently reminded of that after a huge misunderstanding with his DoorDash driver.

Why A Man “Yelled” At His DoorDash Delivery Driver

Earlier in July, Polchleb’s partner had ordered them some McDonald’s. When the food arrived, Polchleb’s dog started barking, as dogs do. The man yelled at his pet in response, saying “Get away from the door mate!” In response, a deliveryman named Sami sprung back from the food, which he had set in the doorway. He didn’t realize his customer was yelling at his dog and thought the comments were directed at him.

RELATED: UPS Customers Trick Delivery Driver, Blindfold Her… and Then Do Something Truly Shocking

On his end, Polchleb didn’t think twice about it until later, when he had a look at his security camera footage.

“I didn’t realize until I reviewed the footage that he could have misunderstood me yelling at my dog,” Polchleb told Today.

It was too late to explain. I couldn’t bear the thought of someone thinking I disrespected them for just doing their job!

How One Man Successfully Tracked Down A DoorDash Driver

Im genuinely losing sleep over this. He was so sweet and my dog is a menace 🥺

Once Polchleb realized his error, he did everything he could to manifest a meeting with his driver and apologize. The man posted a video on TikTok explaining to people what went down and how he was trying to find Sami to make things right. Since then, that original post has been liked nearly eight million times.

“Can someone please tell this sweet, sweet Uber Eats man I was yelling at my dog and not him,” Polchleb begins the video. “I’m genuinely losing sleep over this. He was so sweet and my dog is a menace,” he added in the caption.

RELATED: Uber Eats Driver Leaves Mystery Bag on Porch – What a Couple Finds Inside Takes Them by Surprise

Polchleb wasn’t done there, though. In follow-up TikToks he explained how he originally thought his husband had ordered them food through Uber Eats. By the time he realized it was actually a DoorDash order, it was too late to connect directly with the driver and apologize. Luckily though, the power of social media came through and Polchleb was able to successfully track down Sami.

“It turns out, with the amazing thing that is TikTok, it took only two days to track him down,” Polchleb added to Today. “His daughter stumbled across my original TikTok after around 7 million views, and I was able to connect with her, and then her dad.”

A few days later, Polchleb got to meet Sami and give him a small token of his appreciation while apologizing in person. Naturally, he also updated the millions of people on TikTok who had since become obsessed with the story.

How DoorDash Australia Stepped In To Reward A Delivery Driver

The good news didn’t stop there though. DoorDash found out about the situation and decided as a company it too wanted to recognize Sami. “Our hearts,” the company wrote in the comments of one of the videos.

We’re so inspired by your love and kindness for Sami that we’re going to award him Top Dasher status for life and extra Dasher pay.

That wasn’t all. Through his conversations with Sami, Polchleb learned the man was trying to get some money together for a very specific and personal reason. “It was great to meet him and his family who were so, so proud of him working to raise money to see his son overseas,” he said.

When Sami’s daughter realized how much traction her father was getting online as a result of the videos, she started a GoFundMe page to help her dad bridge the financial gap so he could finally see his son.

“I came to Australia eight years ago as a refugee and I haven’t seen my son for 10 years,” explains the page. “He lives in France, and I have to do some work to book a [plane] ticket to see him.”

Originally, they were asking for $2,000 AUD. Nearly 500 donations later, the family had raised almost $9,000 instead. Now, not only is Sami going to see his son but he’s also got a new friend for life.

“They have promised to keep in touch, which is great,” Polchleb added to Today.

How One TikToker Became Unlikely Friends With A DoorDash Driver

One of the things we love most about this story is how Polchleb’s perseverance in righting a wrong paid off. It also helped a hardworking man reunite with his family and receive a promotion, which speaks to the power of kindness and the online community that worked so hard to help track Sami down.

No one is perfect and everyone makes mistakes. However as Polchleb proved, doing what you can to fix those mistakes and learn from them is what matters most. So the next time you accidentally yell at someone, lose your temper, or even take a bad mood out on someone else, remember that it happens to the best of us. It’s how you try to make things better and adjust accordingly afterward that can truly set it all right and potentially even improve someone’s day.

8 Months Ago, He Was A 39-Year-Old DoorDash Driver – Today, He’s A Pro Golfer

LEARN FROM YOUR MISTAKES
“We need to realize that our path to transformation is through our mistakes. We’re meant to make mistakes, recognize them, and move on to become unlimited.” – Yehuda Berg
Tags
Share
← Prev Post Next Post →