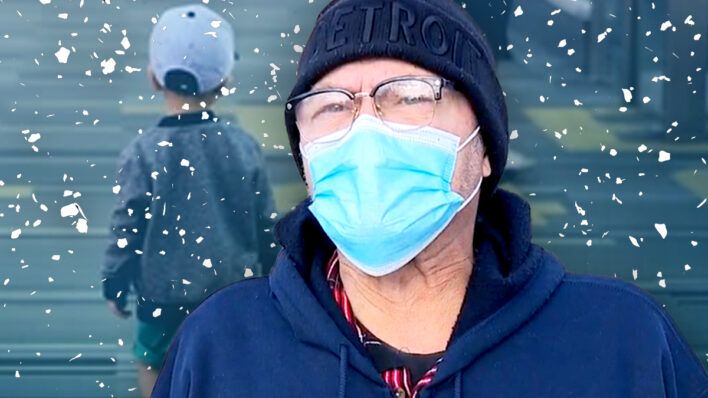 One alert Doordash driver tapped into his paternal instincts when he spotted a freezing toddler in distress.
By Bryan Liquor    April 11, 2022

One alert Doordash driver tapped into his paternal instincts when he spotted a freezing toddler in distress.

Doordash driver Robert Jackson III was making a delivery driving down Detroit’s 8 mile when he made a shocking sighting: there, in the dead of winter, was a toddler, wandering around in nothing but a diaper and socks.

He recounted every chilling detail to Fox2Detroit.

He was standing in the middle of Eight Mile like this. (he) was shaking, his hands and his lips were purple and his fingers were purple

“Oh my God, this is just horrible. This is horrific. I’ve never seen nothing like this in my life,” Jackson could be heard saying as he recorded video footage of the incident.

Since the child was just two-years-old, he couldn’t provide Jackson with any details.

That’s when Jackson — himself a father, and grandfather to over a dozen children — dashed into action.

He wrapped up the frozen boy in a coat and put him in his car so he could warm up. He also managed to wave down another driver and have them call 911.

RELATED: Alert Teens Notice Baby Stuck In A Deadly Car Crash – Stop Everything To Get Her To Safety

The boy was taken to the Children’s Hospital, where he was later checked out with no serious harm, making this story a true success!

Detroit police were able to figure out the child’s identity and determined that he walked outside his family home unnoticed by the babysitter, less than a block from where Jackson found him.

Jackson is just happy with a good deed done.

Protecting Children at All Costs

According to safeatlast, a staggering 2,300 children are reported missing in the US every day, and around 8 million worldwide — some scary figures for any parent.

It’s also a rebuttal to those critiquing overprotective parents. In just seconds, an infant went from sheltered to shivering. You can also bet that the babysitter will be far more diligent next time… if there is a next time. Meanwhile, Jackson showed how to focus when it matters most.

It also reminds us that sometimes, everyday folk like Robert Jackson III might notice a child in danger. When we do, we should — like Jackson — protect them as one of our own. Sometimes, being protective can prevent a child from becoming a number, which is all the motivation needed.