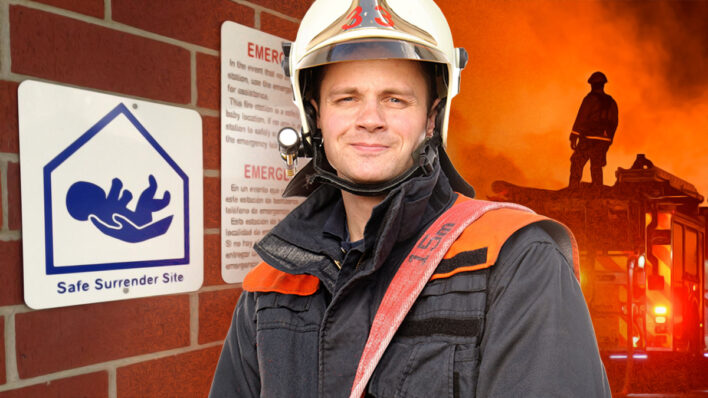 When a woman gave her baby away at a fire station, four men stepped in to take care of her before she found her forever home.
By Lindsey Staub    April 7, 2022

When a woman gave her baby away at a fire station, four men stepped in to take care of her before she found her forever home.

Captain Daryll Milliot thought he knew what to expect from his shifts at the fire station: extinguishing fires and responding to emergencies. But one night, over a year ago, the completely unexpected happened.

Why a Woman Surrendered Her Newborn Baby to Firefighters

“The first thing that comes to your mind is, ‘How can you surrender your baby?’ But then, when you really think about what happened, it’s really heroic and brave to do it,” one of the firefighters on duty, Michael de Leon, told NBC 4.

In addition to Milliot and de Leon, two others helped care for the child: Tyler Green and Shawn Stacy. All four men instantly loved the little girl, but their time with her was limited as a California social worker was already on their way to receive Naomi.

“This is so unique and rare, it’s something I never really thought that I would do,” Milliot said to CBS Los Angeles.

This is one of the few things in my 25 years of being a fireman that it’s just the greatest ending of the story.

Nine months after she was dropped off, Naomi’s mother brought her back to the fire department to reunite with her four uncles. That wasn’t the only time they reunited with Naomi, though. The four men also attended Naomi’s official adoption ceremony.

“It’s one of the highlights of my career by far,” de Leon shared. “Going to that ceremony and getting to see her again… ‘Cause you know, when it happens, you don’t really know what’s going to happen to the baby.”

How One Little Girl Found Her Forever Home and Forever Friends

Though Naomi’s birth mother believed she was not able to take care of her daughter, she did take care of Naomi by giving her to people who can provide for her.

“It really is a great opportunity for us to tell her about her mom and what a courageous thing she did,” Krysten Snyder said.

All those involved- from the mother that gave Naomi up to the firefighters who took her in- exhibited immense care and bravery that day. Several people united to ensure one little girl would have a wonderful life, and now she can.