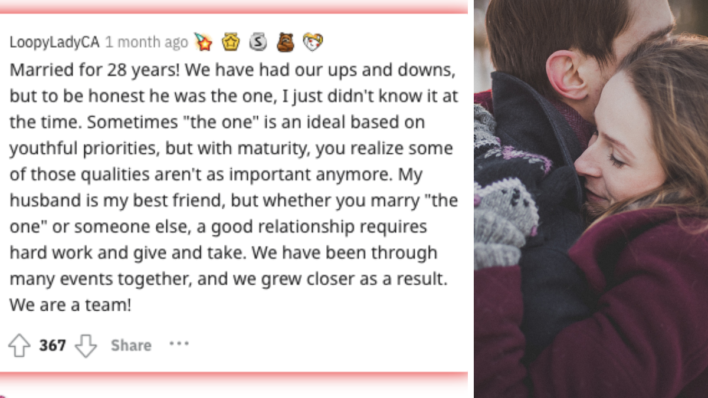 Movies, TV shows and fairy tales crystallize this idea that we grow up only to end up falling in love
By Joel Balsam    May 28, 2021

Movies, TV shows and fairy tales crystallize this idea that we grow up only to end up falling in love with “the one” — our person who fits us in every single way. But what if we don’t end up with the person we thought was “the one?”

A Reddit forum asked women who married someone who wasn’t “the one” a very simple question: how’s it going? What resulted was an array of thoughtful answers that don’t just touch on their own specific situations — they reflect on the very concept of love itself.

For user HaneTheHornist, her relationship with the man she didn’t expect to marry “has gotten better with work.”

“He’s a good man, and I love him but never fell in love with him,” she continued. “At the time we met I didn’t want nor need that. I needed safety and stability. Now that we’ve settled into life together I’ve embraced those traits he brings, and when I get the urge for something more exciting I find it in other ways.”

Now that their kids are sleeping well, HaneTheHornist says she’s been making it work with her partner by rekindling things in the bedroom and having regular date nights again.

“I think what makes us work is that we complement each other well, and we both want this marriage to last. So far it’s worked — we’re celebrating our fifth anniversary next month and have two children and two cats,” she said.

No fireworks, no problem

User lassify never felt “fireworks” for the man she married, but the guy she thought was “the one” was actually “emotionally immature” and the type of guy who calls his exes crazy.

She said the guy she married “is the kindest person I know and he has always treated me with nothing but respect. He is the definition of a good man. And — I can’t explain how I know this — but from the depths of my heart I just know that he will never, ever hurt me. And safe is what I need to feel.“

Love him for who he is

Winninglottoticket doesn’t believe in “the one.”

“I believe in making a choice just like with anything else. We choose our partners based off a long list of reasons of everything from looks to how comfortable we are with them, etc,” she wrote.

Even though her partner isn’t the stereotype of a suitor (ie. tall, dark and handsome), he’s the right one for her.

“I chose my husband because he meets a lot of my needs, and I love him for that and for who he is. He’s not a GQ model, he’s not rich and yes sometimes he bugs the crap out of me, but I chose him. And I choose to love him for who he is rather than hold out for the idea of ‘the one.'”

Finding her forever one

LoopyLadyCA and her man have been married for 28 years — and she couldn’t be happier. “We have had our ups and downs, but to be honest, he was the one — I just didn’t know it at the time. Sometimes ‘the one’ is an ideal based on youthful priorities, but with maturity, you realize some of those qualities aren’t as important anymore.”

She added that she ran into “the one” again a few years back, but wasn’t impressed. “I think I made a good escape there!”

In it for the long haul

Babaloo_Monkey wonders if people confuse “the one” with the infatuation stage of romance.

She might not be in passionate love with her partner, but their relationship simply works.

“My good husband now is good. He’s a fine person; a strong provider; he makes me laugh; the sex is satisfying. We can talk to each other easily. It’s just not “IN LOVE” that everyone says they want,” she said.

“Don’t get me wrong: There is love,” she added. “But the romance/prince charming/Ride Or Die thing is not there. I’m in this for the long haul. So is my husband.”

Like so many others, user killerwheelie expected to feel something in her stomach when she met the man who’d become her husband. But the butteflies never showed up.

“I was convinced the one was going to give me butterflies and be overwhelmed by my presence, when I met my current partner none of those things were true,” she wrote. “I kept questioning it being like somethings wrong I don’t know if he’s the one. We’ve been together for a while and I’m glad I didn’t listen to those shreds out doubt. Butterflies are overrated, my partner shows up for me everyday and we have built a really strong and solid foundation.”

Killerwheelie added that her partner pushes her to be a better person everyday and is willing to push himself to be better, too.

“I’m not saying stick with people you aren’t right for, but that definitions of love change as you get older. And passionate flame sparking loves with no foundation don’t last for a reason.”

Are you sure they’re not ‘the one?’

These women’s responses aren’t proof that “the one” doesn’t exist — storybook romances do happen. It’s just that whether someone starts off as “the one” or not, relationships take work, respect, and most of all — love. If you can find all of those things in someone, that certainly sounds like “the one” to me.