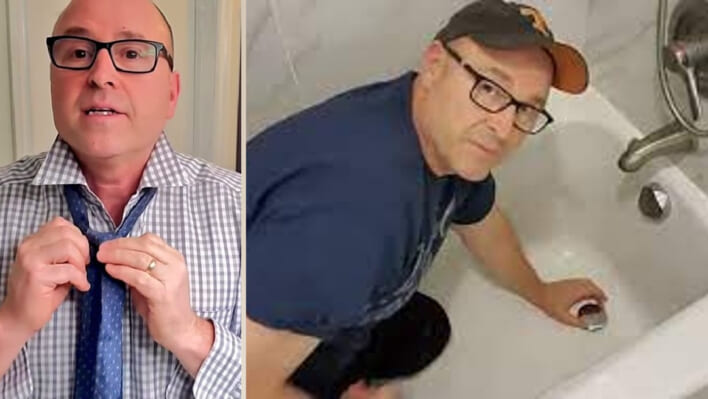 For Robert Kenney, his YouTube audience is more than just fans, they are the students he always wanted to be.
By Carl Wordsworth    January 5, 2023

For Robert Kenney, his YouTube audience is more than just fans, they are the students he always wanted to be.

“Hey kids, it’s great to see you again!” begins the most recent video on the popular Youtube channel Dad, How Do I.

The voice is that of Rob Kenney, beaming as he speaks to the camera and addresses his rapidly growing audience. Kenney, Known also as the “internet’s Dad” has been producing how-to videos for years.

Who Is Robert Kenney?

Kenney began his YouTube channel in April 2020, amidst the isolation of a global pandemic, the channel contains hundreds of videos where Kenney teaches viewers a myriad of life skills, ranging from home improvement to cooking and everything in between.

RELATED: Man Attacks Famous YouTuber Online – What His Dad Does Next Is Applause-Worthy

Though the videos have now reached an audience far beyond what Kenney could ever imagine, he began the channel with the intention of creating content for those who grew up without a father figure, focusing on lessons traditionally passed down from a male role model.

A quick scroll through his recent uploads reveals advice for fixing a running toilet, planting a tree, shaving his face, and similar how- to’s.

The Channel Has Changed Lives

His videos offer more than just practical advice however, and one titled simply “I Am proud of you!” reveals Kenney’s approach to the entire endeavor. Kenney has cultivated a welcoming space online for more than just tutorials. Many commenters share that they watch the videos for Kenney’s encouraging disposition, and the response has been overwhelmingly positive.

RELATED: Strangers Give Dad a Note at a Restaurant About His Twins – Little Did They Know One of Them Had Passed Away

The channel has grown to over 4 millions subscribers in the last two years, and and he has even recently published a book. While many on Youtube now seek monetary gain or recognition, Kenney is more concerned with instilling confidence and spreading positivity– a  selfless approach that feels rare for the platform. While many might celebrate such an engaged audience, Kenney admits that “it was terrifying” at first.

He found himself flooded with media requests and corporate opportunities framing him as the ‘Internet’s Dad’. Followers flocked to him with their own stories of childhood abandonment, broken relationships and familial trauma. Kenney revealed that “it breaks my heart that so many people need my channel” in a Washington Press piece profiling him, and for Kenney this reaction is deeply personal.

Rob Kenney, of all people, understands the importance of his videos, as he himself grew up in without a positive male role model. After his parents divorce, he revealed that his father met another woman and would often leave his children for long stretches of time while traveling to spend time with her.

His mother, on the other hand, was deemed unfit to retain custody due to substance abuse issues, and after a year, his father gathered Kenney and his siblings and told them he was simply done raising children.

RELATED: Dad Realizes He Can’t Afford an Expensive Plane Ticket for His Toddler – So a Stranger Buys It for Him and Quietly Slips Away

One of 8 children, Kenney was just 14 years old at the time, and recalls a childhood of anger and confusion following the abandonment. This experience shaped Kenney, who vowed to never allow his own children to ever feel that pain. After raising two children of his own, Kenney began posting on

Youtube once they grew up and moved out, and really committed to the channel when he realized how widely his experiences resonated with others. For Kenney, this channel is part of a larger mission, and a testament to the strength of the human spirit. Though Rob Kenney experienced a childhood no one should, he was able to turn his trauma into triumph, and use his experiences to help others.