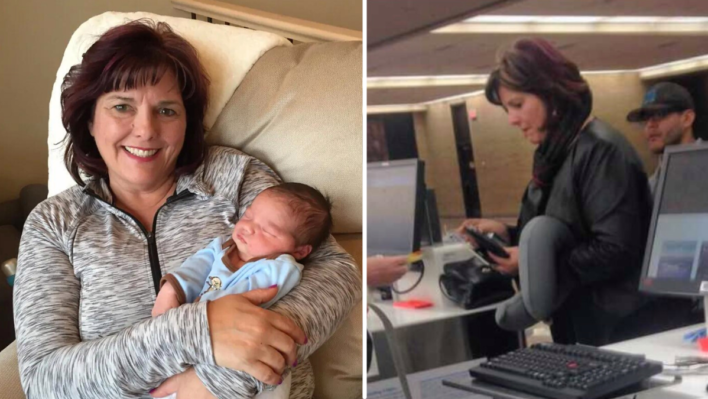 After a man found out his toddler was just above the age of a free seat on a flight, a good samaritan bought a ticket for him.
By Lindsey Staub    November 23, 2022

After a man found out his toddler was just above the age of a free seat on a flight, a good samaritan bought a ticket for him.

*This story first appeared on Love What Matters on April 18, 2018

With the holidays upon us, airports are in their busiest season, making an already stressful place with its crowds, queues, and scanners that much more anxiety-inducing.

That’s why a woman was praised so highly after she stepped in to help a struggling father after his toddler was denied a free seat on the plane.

In Omaha, Nebraska, one man assumed his two-year-old would get a free seat on his flight.

It wasn’t until he was checking in that the agent told him otherwise.

RELATED: Flight Attendant Meets Teacher After 30 Years – Makes a Speech About Her True Nature in Front of All the Passengers

The girl’s father hadn’t bought his daughter a ticket, assuming she was still young enough to fly for free. However, he was told that his daughter was over the age limit by just two months.

“He was hit with emotion. He mentioned he couldn’t afford to rebook this flight or get her the ticket with such short notice,” Kevin Leslie, who was also on the man’s flight, said. “He stepped aside and tried to make a few calls. Hugging his daughter and grabbing his head, you could tell he was heartbroken.”

That’s when an “angel in disguise” saved the day.

One woman overheard the man’s situation and told the agent she wanted to help. “I wanna buy her ticket,” the woman said, pointing to the little girl.

“You know how much this ticket costs, right?” the agent asked.

It was actually $749, but the woman still pulled out her credit card.

How a Woman Proved the Importance of Lending a Hand

The man was incredibly grateful, asking the woman for her name so he could pay her back. However, the woman told the man not to worry about it and walked away.

It was Leslie who broke the story to the world after his post went viral with more than 45,500 shares on the Facebook page of blogging site “Love What Matters.”

Via Leslie’s post, the woman’s identity was found. Her name was Debbie Bolton and she was the co-founder and global chief sales officer at Norwex.

RELATED: Bride Hops on a Flight and Goes to Another City After Her Wedding – For a Man Who Isn’t Her Husband

“We have always appreciated the loving spirit of Debbie Bolton,” Amy Cadora, chief marketing officer at Norwex, told CBS News. “She’s kind, caring and generous. That’s why none of us was a bit surprised when we saw the recent post on social media about her generosity.”

Bolton was full of humility.

She said she “did what anyone else would do” and didn’t expect so many people to see her quiet act of kindness. Now that it has reached so many, she said she hopes the story inspires others to make positive impacts on the lives around them.