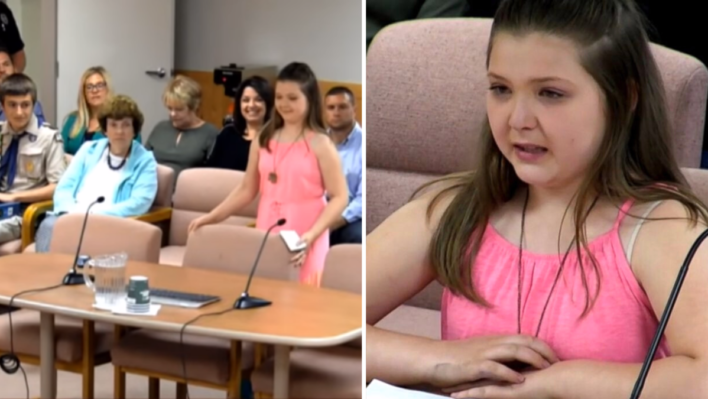 A brave fifth-grader has inspired thousands of people after speaking out about bullying at her school.
By Amber Dowling    November 14, 2022

A brave fifth-grader has inspired thousands of people after speaking out about bullying at her school.

As parents, we want to protect our children from everything, especially as they venture into the world without us. Unfortunately, bullying continues to be a problem in many schools, and one family has had enough.

Why One Brave Little Girl Spoke at a School Board Meeting

In 2019, Todd Marcotte and his daughter, Delaine Marcotte, attended a school board meeting. They planned to ask members to help end bullying at Delaine’s elementary school in Plaistow, New Hampshire. They had failed to get a resolution through the school, so Todd wanted to escalate things with the Timberlane Regional School District board.

At the last minute, Delaine decided she wanted to read her statement instead, gathering up her courage to address the people she hoped could do something to help her.

“I am here to talk about a problem that means a lot to me, bullying,” she opened. “Bullying is a problem in our school. I am a victim of it. My parents have contacted the school about it, but it continues. It happened to me and my classmates,” she continued.

“I have been asked by the mother of my bully during a school field trip why I try to get her son in trouble. I have been threatened to get shot in the head by an AK-47 and buried in my backyard and many other things.”

As Delaine fought back tears, she then turned the table on the board. “I ask you, what are you going to do to protect me and my classmates against bullying? I am here to stand up for every kid that gets bullied.”

The board then thanked Delanie for her courage and applauded her as she returned to her father and sat down.

Later, Todd shared a video of his daughter’s statement on Facebook, where many people saw it, shared it, and commented on it. The post even caught the attention of several news outlets, who wanted to speak more with the family about their situation.

“[I wanted to let the board] know I was getting bullied and that I didn’t want it to happen anymore,” Delanie told an NBC outlet. “They kick me and they say mean things, call me names — it is not nice.”

“It is very hard to watch your child get bullied, hear about it day in and day out, and you do get very aggravated,” Todd said. “It’s an issue, and it’s an issue that has to be addressed.”

“We will continue to encourage all students to speak up when they see, hear or experience something that makes them uncomfortable,” Timberlane Regional School District Superintendent Earl F. Metzler added.

“The same holds true for parents and community members. There are many vehicles at Timberlane to share your concerns, including, but not limited to, the public comment portion of our School Board agenda.”

How a Fifth Grader Proved the Importance of Speaking Up

Delanie’s story resonates with anyone who has ever been bullied. What makes her story so important, however, is how she shared it. Many suffer in silence, which allows bullying to continue. But, as Delanie proved by opening up about her experiences and asking for help, people will take notice if you speak up.

If you think your kid is being bullied, it’s essential to have an open dialogue and ask them how they think the issue can be resolved. Encourage them to speak with a teacher or another adult at the school who can help.

RELATED: 5-Year-Old Throws Up Every Day Before School Because of Bullies – Then, an Angry Football Star Steps In

Do not ignore signs of bullying, such as a child acting differently or anxious, not sleeping or eating well, or avoiding certain situations, like taking the bus.

Meanwhile, if you think your child is being a bully, speak directly and honestly to your child rather than defending the behavior. Kids don’t always know how their actions affect others, so it’s important to teach them and be open.

It’s also a good idea to be specific about the actions you want to see from your kid and setting consequences for continued behavior.

For more resources on bullying, head over to the Child Mind Institute.