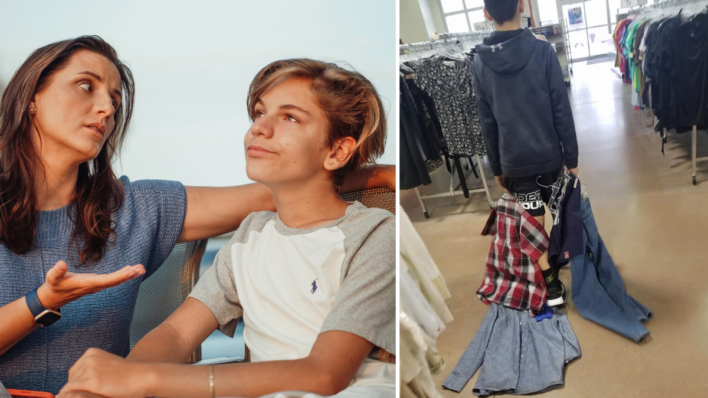 A Georgia mother’s life lesson about fashion and acceptance resonates with thousands.
By Amber Dowling    October 5, 2022

A Georgia mother’s life lesson about fashion and acceptance resonates with thousands.

We are all more than the clothes on our backs. That goes whether we have the privilege of shopping at a designer store or we get our threads at a thrift store. Well, one mom wanted to make sure her son never forgot that when she taught him a lesson that went viral.

Why One “Entitled” Son Was Taken to the Goodwill Store

In 2018, Georgia mom Cierra Brittany Forney realized her pre-teen son had been acting entitled. So she decided to do something about it. In a post on Facebook (which is no longer available), she revealed she wasn’t about to tolerate that behavior from her 12-year-old.

“Acting like he’s too good to shop at Walmart or making snarky comments about kids at school who shop at the Goodwill and quite a few other things,” Forney shared, as per a Fox News outlet.

So she decided to give her son twenty bucks from his savings and head to the local Goodwill store. Then, he had to buy his own clothes to wear to school that week.

“Whatever he found is what he would have to wear,” she explained. “He [wasn’t] happy and shed a few tears, but I firmly believe in 15 years, he will look back and laugh at the day his Mom made him shop at Goodwill… If you have to degrade other people because of where they shop, then you too will shop there,” she added.

How One Mom Showed Money Isn’t Everything

After sharing the photo of herself shopping with her son, it went viral, and the post was shared more than 200,000 times. Forney told the Fox outlet she never imagined so many people would see her parenting lesson, but since then, she has connected with other mothers who also want to raise good kids.

“I was mad because I didn’t want to shop there at first. I thought I was going to look kind of crusty or something,” Forney’s son, Anthony, told the outlet. “I didn’t want to be there, but it really did change me. I realize I was just being a brat, and you should just be thankful for what you already have.”

RELATED: 11-Year-Old Genius Passes Up Higher Learning And It’s A Lesson For All Parents

Forney added she has nothing against Goodwill and that wearing clothes from there was not a punishment. Instead, her lesson went much deeper than that.

“I didn’t do this to punish him. It wasn’t to show him that Goodwill isn’t a good place to shop,” she explained. “I did this to teach him that money and name brands don’t change who we are as people. He can still be the amazing, adorable, loved kid that he is without the expensive stores!” she continued.

“My son has learned a valuable lesson from this, and my son is rockin’ his button-up shirt he bought from the Goodwill with pride.”

How a Mom’s Valuable Lesson Resonated With Thousands

Forney’s lesson in parenting is an excellent example for all the parents out there who are worried about their kids potentially becoming entitled or spoiled. As parents, we always want to give our kids the best and can quickly grab them new things without stopping and acknowledging that not everyone has as much as we may have.

That’s where family charity work, volunteering time with others who aren’t as fortunate, or even taking opportunities to walk a mile in someone else’s shoes is always valuable.

RELATED: Woman’s Toxic Ex Returns Only To Ghost Her Again – And It’s A Lesson For All

But this story also reminds us that we should always try not to judge someone by their appearance because we never know what a person is going through.

Instead, focus on fundamental traits like kindness, bravery, friendship, and all-around decency. By paying less attention to superficial things and more attention to the qualities that make a person unique, we can all lead by example.