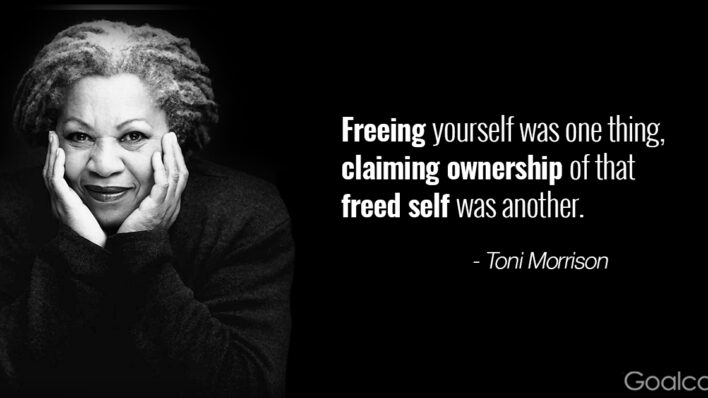 16 Toni Morrison Quotes to Make You Hold Your Head High

Her masterpiece, “Beloved”, got her a Pulitzer Prize and an American Book Award in 1988. The novel, a powerful story about slavery, was adapted into a movie starring Oprah Winfrey and Danny Glover 10 years later. In 1993, Toni Morrison was also awarded the Nobel Prize in Literature and later on she was selected for the Jefferson Lecture, receiving the highest honor for her accomplishments in the field.

Everyone dreams of a life filled with achievements, prizes and being honored by the president himself (Bill Clinton gave a speech about Morrison during the award ceremony for National Arts and Humanities), but Toni’s life was not always paved with happiness. Her family was very poor, and because they couldn’t pay the rent anymore, their landlord set fire to the house they lived in. She was only two years old back then, but her parents passed on a valuable lesson to her: never fall into despair and just laugh in the face of evil.

And because you should always keep your dignity and integrity no matter how cruel the circumstances, here are 16 Toni Morrison quotes to help you hold your head high when life gets tough. Freeing yourself was one thing, claiming ownership of that freed self was another.

You are your best thing You wanna fly, you got to give up the thing that weighs you down.

Make a difference about something other than yourselves.

Somebody has to take responsibility for being a leader.

There is really nothing more to say-except why. But since why is difficult to handle, one must take refuge in how.

As you enter positions of trust and power, dream a little before you think.

I get angry about things, then go on and work.

You need a whole community to raise a child. I have raised two children, alone.

I would solve a lot of literary problems just thinking about a character in the subway, where you can’t do anything anyway.

If there’s a book that you want to read, but it hasn’t been written yet, then you must write it.

Love is or it ain’t. Thin love ain’t love at all.

At some point in life the world’s beauty becomes enough. You don’t need to photograph, paint, or even remember it. It is enough.

She is a friend of my mind. She gathered me, man. The pieces I am, she gathered them and gave them back to me in all the right order.

Sweet, crazy conversations full of half sentences, daydreams and misunderstandings more thrilling than understanding could ever be.

And I am all the things I have ever loved: scuppernong wine, cool baptisms in silent water, dream books and number playing.

Anger … it’s a paralyzing emotion … you can’t get anything done. People sort of think it’s an interesting, passionate, and igniting feeling – I don’t think it’s any of that – it’s helpless … it’s absence of control – I have no use for it whatsoever.