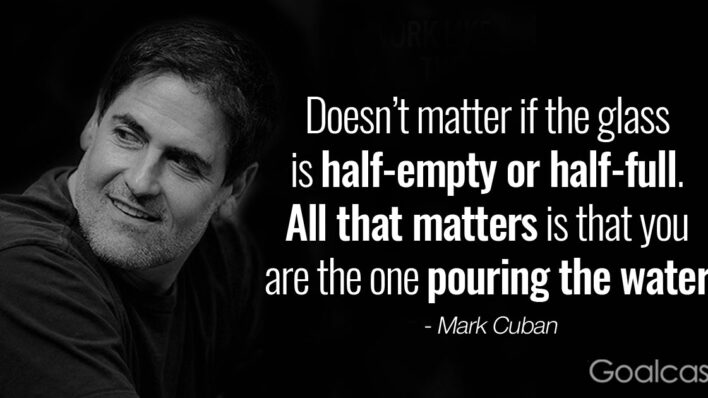 Mark Cuban is a self-made billionaire, professional basketball team owner, TV star, author, and even a blogger. He made it
By Dustyn F    October 13, 2016

Mark Cuban is a self-made billionaire, professional basketball team owner, TV star, author, and even a blogger. He made it big by co-founding Broadcast.com back in the 90s and selling it Yahoo for around $6 billion a year after bringing the company public in 1998.

His lifelong dream of owning an NBA team, the Dallas Mavericks, came true in the year 2000 when he bought it from the existing owner. His inspiration is crossing so many minds ever since he has become a star on the highly popular show Shark Tank. Here he shows off his wisdom, experience, and inspiration on what he did himself to get to where he is today.

His blog even allows you to enter into his thoughts, understand how a billionaire’s thinks, and divulge yourself into extremely interesting and thought provoking topics. Everything from technology and IPO’s to cyber security and privacy are all topics Mark himself openly discusses over on his official blog.

And with his book How to Win at the Sport of Business out and readily available, he is now also known as an author along all of his other titles. His book is just another great addition to his blog in which he discusses his thoughts on business, but this time exactly how you can truly win in the sport of business.

With that, all of these quotes by Mark Cuban below will explain everything about his mindset towards business and life. He proves to be a role model for many, and his quotes will surely inspire you to take action in your life and start working 24/7 on your dreams and aspirations.

“It doesn’t matter how many times you have failed. You only have to be right once.”
– Mark Cuban

“Sweat equity is the most valuable equity there is. Know your business and industry better than anyone else in the world. Love what you do or don’t do it.” – Mark Cuban

“What I’ve learned in these 11 years is you just got to stay focused and believe in yourself and trust your own ability and judgment.” – Mark Cuban

“Doesn’t matter if the glass is half-empty or half-full. All that matters is that you are the one pouring the water.” – Mark Cuban

“Every no gets me closer to a yes.” – Mark Cuban

“Don’t get caught up in how many hours you work. Judge success based on having goals and measuring your results. Hard work, and lots of it, is certainly needed, but focus on what you get done.” – Mark Cuban

“Always wake up with a smile knowing that today you are going to have fun accomplishing what others are too afraid to do.” – Mark Cuban

“If you’re prepared and you know what it takes, it’s not a risk. You just have to figure out how to get there. There is always a way to get there.” – Mark Cuban

“Don’t start a company unless it’s an obsession and something you love. If you have an exit strategy, it’s not an obsession.” – Mark Cuban

“One thing we can all control is effort. Put in the time to become an expert in whatever you’re doing. It will give you an advantage because most people don’t do this.” – Mark Cuban

“Work like there is someone working 24 hours a day to take it all away from you.” – Mark Cuban

Treat your customers like they own you. Because they do.” – Mark Cuban

In the past, people used to tell me to shut up a bit. But what I believe is to put out your opinion and let everyone else react. If I’m wrong, I’m wrong.” – Mark Cuban

“Creating opportunities means looking where others are not.” – Mark Cuban

“Most people think it’s all about the idea. It’s not. EVERYONE has ideas. The hard part is doing the homework to know if the idea could work in an industry, then doing the preparation to be able to execute on the idea.” – Mark Cuban

“I love to compete. To me, business is the ultimate sport. It’s always on. There is always someone trying to beat me.” – Mark Cuban

“Everyone is passionate about something. Usually more than one thing. We are born with it.” – Mark Cuban

Dustyn is the owner of personalself.com and loves dry humor and helping people live a full life. Through education and awareness, he is able to help people achieve their life mission and purpose in life. Love becoming a better you and dry humor? PersonalSelf.com is made for you!