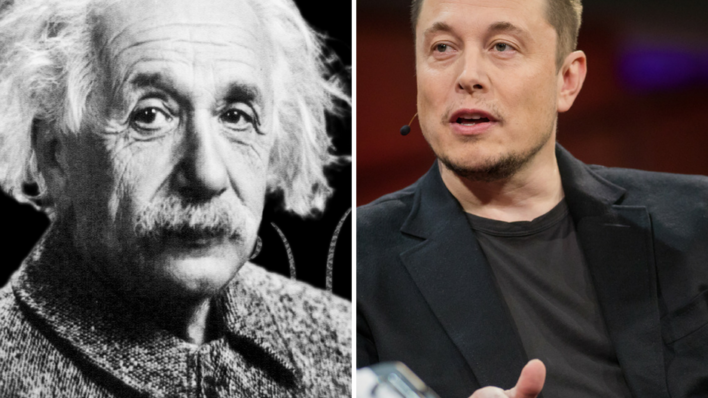 3 Traits Albert Einstein and Elon Musk Have in Common

It’s hard to go a minute nowadays without seeing a headline that has something to do with Tesla and SpaceX
By Matt Valentine    May 31, 2018

It’s hard to go a minute nowadays without seeing a headline that has something to do with Tesla and SpaceX founder Elon Musk or one of his many business ventures.

Both idealistic and analytical – from creating electric batteries to literal space rockets– Elon Musk is clearly much more than just a businessman trying to turn a profit. And therein lies why he’s so interesting.

For the same reason Steve Jobs was so revered, Musk has a greater mission and a vast vision for the future and the human race as a whole.

So it’s not surprising that Musk gets compared to Albert Einstein. Einstein was more than just a scientist, he was a philosopher and contemplated the meaning of his work and what the future would hold– and what we need to do to not only survive, but also thrive as a species. But do these two innovators actually have anything in common aside from some vague beliefs? According to New York University professor Melissa Schilling in her new book Quirky, yes, famous physicist Albert Einstein and billionaire visionary businessman Elon Musk have several eerily similar qualities. One of the most distinct similarities between the two thought leaders is that both experienced a feeling of being detached and out of place throughout childhood.

“At first, I thought this was maybe just a side effect of something else related to innovation,” says Schilling. “Particularly Einstein and Musk, they were so introspective as children that people thought they were deaf.”

However, this trait cultivated a high level of self-sufficiency.

Musk, who attended seven different schools while growing up, escaped into his own learning frequently due to this feeling of disconnect, consuming huge numbers of books and playing video games frequently.

Einstein, similarly, found it easier to rebel because he was disconnected. This played an important part later in his career, as Schilling notes:

It’s a big part of why he was able to cast away Newtonian concepts that held back other scientists and enabled him to come up with scientific theories that were really revolutionary for his time,

Schilling says this disconnect from social constructs played a big part in Musk and Einstein’s willingness to step outside the rules and create bold new ideas:

“Because they didn’t belong to the social world, they didn’t have to obey its rules, freeing them to develop bold ideas and stick with them even in the face of criticism,” she says.

“This highlights the value of spending some time alone, reading, writing and thinking about things that we find intrinsically interesting.” Second, both Einstein and Musk were and are clear idealists.

“Einstein wanted to find a simple harmonious truth about how the universe works and Musk wants to save our species by weaning us off of fossil fuels and establishing a colony on Mars,” says Schilling.

She continues, “When people are genuinely motivated to do something, they will work harder and longer and will stick with their goals in the face of criticism.”

It’s this idealistic vision which created– and creates– such fervent work ethic and relentless persistence. Without this, we as people quickly fall off track. We need a big reason behind why we’re doing what we do to remain motivated in the long run.

“Pursuing goals they see as intrinsically noble and important made them fiercely motivated and focused and it provided a form of ego defense against criticism and failure,” she says.

“We can all benefit by cultivating a grand ambition, a goal that is big enough to stretch our vision beyond our current horizon and important enough that it fuels our tenacious effort.”

3. Their views on education Lastly, neither Einstein or Musk were model students.

“Each of these men chafed at the structure of formal education,” says Schilling.

Both Einstein and Musk had little respect for the traditional educational structure. Musk would repeatedly skip class in college and just show up to take his exams, while Einstein consistently caused trouble for his teachers by disrespecting authority, missing class and frequently being tardy.

However, when it came to the subjects that each loved and had an interest in, they typically scored very high marks. Why does that matter, aside from being an interesting similarity between the two? Well, it brings up an important point:

“One of the implications for the rest of us – whether we invest in formal education or not – is that we should look for those topics we find interesting and important and study them intensely on our own terms,” Schilling says. “The topics we study on our own are the areas in which we are more likely to develop creative ideas.”