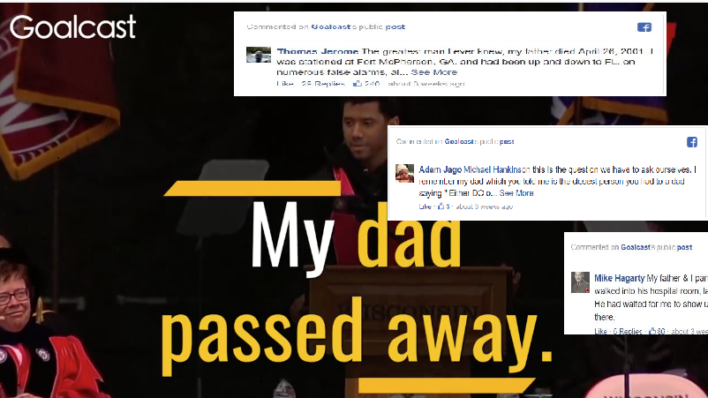 Named 2012 NFL Rookie of the Year, Russell Wilson is considered an NFL powerhouse. Wilson’s career has flourished in recent
By Sohani    November 4, 2017

Named 2012 NFL Rookie of the Year, Russell Wilson is considered an NFL powerhouse. Wilson’s career has flourished in recent

Named 2012 NFL Rookie of the Year, Russell Wilson is considered an NFL powerhouse.

Wilson’s career has flourished in recent years, playing quarterback for the Seattle Seahawks. In 2015, his extension with the Seahawks made him the second highest paid NFL player (at the time) with a contract worth $87.6 million.

Throughout Wilson’s career, he has always been reminded of what it means to work hard, commit, and chase your dream.

“The question I asked when life told me no was, “What am I capable of?” I knew I could throw a football and move really well. I knew I had the focus, I knew I had the ability to succeed, so a few days after our first meeting I walked back into my coaches office chest big, feeling good and I said, “Coach, I’m gonna be your starting quarterback. I’m gonna play the National Football League for a long time, I’m gonna win multiple Super Bowls, I’m gonna be a Hall of Fame quarterback. What do you think?””

In his commencement speech to the University of Wisconsin-Madison, Wilson shares the wisdom he learned from his father, Harrison B. Wilson III, a wide receiver for the San Diego Chargers.

“I remember playing t-ball as a kid, and not to brag but I was a really good t-ball player. I’m talking about really good. I remember thinking, “You know, I could be something special one day.” My dad thought I might be getting ahead of myself, so he’d set me straight. He’d say, “Son, potential just means you haven’t done it yet.””

Sadly, his father passed away in 2010 from diabetes and was unable to see Wilson play the Super Bowl three years later. However, it is clear that his father’s work ethic and positive outlook have been deeply ingrained in how Russell approaches a challenge.

“Already in my career I’ve seen that lots of people have potential, but not everyone does it. The question isn’t whether you have something to offer to the world. You definitely have something to offer to the world. The question is how, and whether you’ll do it. I’ve learned that the difference isn’t the way people handle themselves when things go well. The moments that really matter are the moments when life tells you no.”

Here are 8 of the most poignant tributes to dads all over the world after seeing Russell Wilson’s speech:

Comment in full: “My father & I parted in much the same manner as this … I walked into his hospital room, laid my hand on him and he stopped breathing. He had waited for me to show up … as he always did. Even in death, he was there”

Comment in full: “The greatest man I ever knew, my father died April 26, 2001. I was stationed at Fort McPherson, GA. and had been up and down to FL. on numerous false alarms, all of them worth it as I got to see dad. This one was different, my Sis called me and I could tell by her voice it was bad. Told my Colonel I had to go, all he said was go, we’ll handle it. I left, hit my house, I have no idea why I grabbed my dress uniform but I did. 6 hours later and no tickets I got to the hospital in Clearwater, FL. I was still in my BDUs and asked the nurse how did it look, she just shook her head. I walked in the room in ICU and the entire family was there, my Sis told me daddy had been waiting for me. He was in a coma, his breathing strained. I bent down, held his hand and told him “daddy, I’m here”. His breathing eased, I told him “it’s ok, go be with Jesus”. 2 minutes later as I held my fathers hand, he went to our Father. Then I knew why I grabbed the dress uniform, I gave the eulogy at his funeral. I miss him ever day. This man, who’s mother died when he was 3, his father at 14, went to West Point, fought 2 wars, WWII and Korea, made me who I am today. I still catch myself dialing his old phone number to ask advice even after 16 years. God knows I have seen tragedy, death and destruction in combat but nothing prepares you for the death of a loved one. I am now an orphan, both parents gone, two sons gone. God never gives you more than you can handle, God must think I’m a real bad a$$”

Comment in full: “This is true! My dad die when I was in college too and it was ine of the most hardest things in life i had to do was to go on and complete school and make a life without my dad.”

Comment in full: “this is the question we have to ask ourselves. I remember my dad which you told me is the closest person you had to a dad saying ” Either DO or DONT DO..there is no try.” which obviously a quote from Yoda but super true. We have the chance to be immortal with our gift of song. Dad says hes kicking our ass in the afterlife if we dont step up and DO.”

Comment in full: “I remember my father taking his last breath. He had lung cancer and 1 lung was already destroyed. He was in a coma and he was fighting every breath he would inhale. He was a fighter and did not want to give up. I told him “Its okay dad, you will always be a winner. You don’t need to fight anymore”. A few mins after he passed. Strongest man I know!”

Comment in full:“I love Russell Wilson so much more now than I did before lol 💙 this was awesome! My father past in January I never answered his call the day before he killed himself because I didn’t wanna deal with him at that moment….I’ll never know”

Comment in full: “I usually don’t comment to people on stuff but please don’t beat yourself up over not answering that call. I lost my mom to suicide nearly 18 months ago and on the day that it happened I had planned to call her just to say hi and tell her about my weekend but I got busy with other things and didn’t. Next thing I knew I got “the call” from my dad. I too will never know and it sucks. I’m so sorry for your loss”

Comment in full: “Shout out to the greatest dads in the world who are still with us or have left us with great lessons ,stories and memories ❤️❤️❤️”

Russell Wilson’s speech has been viewed over 5 million times with over 2000 people commenting on the Goalcast Facebook post alone.