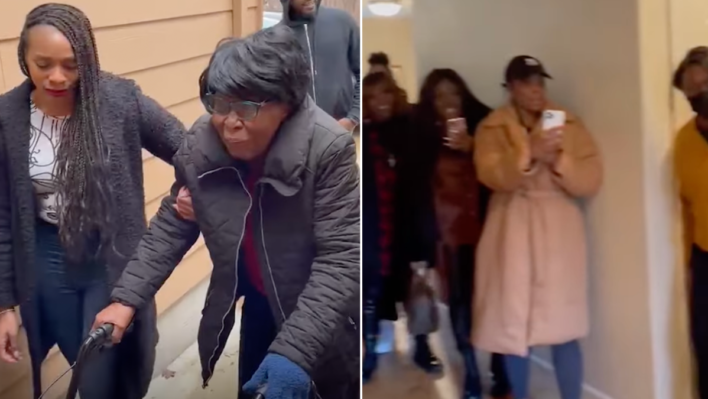 Like many a young child who sees a beloved parent or grandparent working hard to raise them, eight-year-old Janita promised to buy her grandma, Irma Badon, a house one day. Her grandma was the most selfless person Janita knew. Irma took care of her, and Janita wanted to do the same.

The two were close, and it was a proclamation made with love; but like many proclamations made by eight-year-olds, it was soon forgotten. At least by Irma.

Walking Down the Street to Her Incredible Gift

That’s why, one day in December, Irma couldn’t understand why Janita and a few more of her family members were leading her down a sidewalk to go get her Christmas gift. Irma uses a walker and needs the support of her family to make certain crossings. Why couldn’t they just bring the gift to the house, she asked?

“It’s a little hard,” Janita giggled, trying to contain her excitement. She encouraged Irma to keep walking and started to make an excuse, telling her beloved grandmother that the gift was too big. But as they came to the front door of a house with a big, red bow on it, she couldn’t wait any longer.

Why couldn’t Janita bring the gift to the house? “Because this is your house!” Janita gushed. “Merry Christmas!”

Irma was shocked—even more so when the door opened and she found her whole family inside. “One, two, three—surprise!” They all shouted. Dozens of her children, grandchildren, and other family members, from older adults to babies in footed rompers, awaited Irma inside her new house. This was the large, beautiful family that Irma had kept together over the decades as the loving matriarch of it all.

“Surprise, Momo!” Voices from all her family members echoed each other, using the name they all affectionately called her.

Happy tears ran down Irma’s face as she looked around at her new house. She remembered Janita’s promise: “She said, ‘Momo, I’m going to buy you a house!’” And she did. Janita had delivered on her promise, and by doing so, she had fulfilled Irma’s lifelong dream. The moment was so special and so meaningful that many family members were in tears.

The touching moment, caught on camera, was posted to Facebook, specifically to share with even more of Irma’s friends and family members. People were quick to write in about how Janita’s act had touched them, too; many people were moved to tears right along with Momo.

“This is so amazing! That’s how you give back and honour a generation!” Wrote Phillip Johnson Jr.

“What beautiful blessing! I love it!” Wrote Chaleigha Lewis.

“You are an amazing and awesome woman to keep, and achieve, such a great promise to your Momo!!!” Wrote Kris Clemence-Lucas.

No Feeling in This World Like Keeping a Promise

Indeed, many young children make wild, loving promises to their elders, promising them the world—but very few deliver on those naive promises made before they realized how difficult life can be.

What a beautiful circle to the story of their relationship.