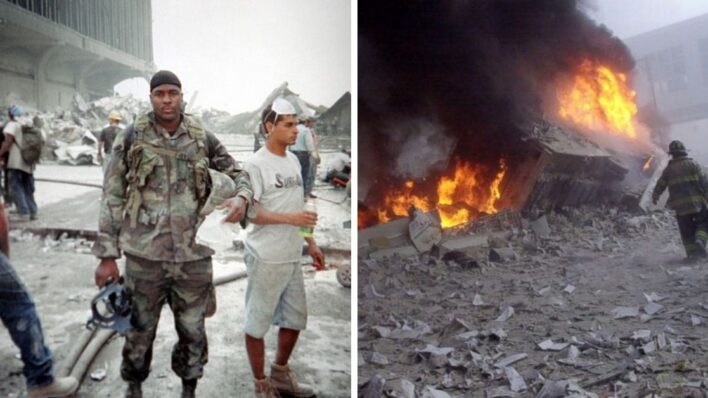 On 9/11, He Saved 2 Men Buried Under Rubble And Then Disappeared–This Is His Story

Nineteen years ago today, was an unforgettable moment in American and world history. And while most people remember where they
By Aly Walansky    September 11, 2020

Nineteen years ago today, was an unforgettable moment in American and world history. And while most people remember where they were at when the two towers fell, there are countless stories of those who experienced it firsthand that still need to be told.

One of them is that of an anonymous hero, who saved two policemen, Will Jimeno and John McLoughlin, who were trapped between thirty feet of rubble after the towers fell.

All seemed hopeless, and they thought they were going to die. But suddenly, a window of hope appeared.

Watch this Goalcast video for more tales of heroism:

He stopped everything to go help

That hope can in the form of a black former sergeant in the US Marine Corps named Jason Thomas, who was 27 years old at the time. On that fateful day, he had just dropped his daughter to daycare while on his way to his law school classes when he heard the news. “I didn’t have a plan. I just knew someone must need help. I was trained as a Marine and we don’t walk away,” he said. “Marines don’t turn back. We go forwards.

Someone needed help. It didn’t matter who. I didn’t even have a plan. But I have all this training as a Marine, and all I could think was, ‘My city is in need.’

He immediately put on his marine uniform that he carried in the trunk of his car, and headed from Long Island to Manhattan. “It truly looked like a battlefield,” Thomas said in the documentary, The Lost Hero.

Thomas first helped the firemen and medical staff for hours but then, he was sure there were more survivors buried under the rubble.

Along with David Karnes, another former Marine sergeant, Thomas set out to find them braving the fire and smoke. He paused whenever he detected a whole and shouted: “United States Marines — is anybody down there?”

They were certain they would die

Will and John were with three other cops, helping with the evacuation when the first tower collapsed, burying them in the rubble. Two of the cops died instantly, while the third was killed by the collapse of the second tower. Only Will and John remained, hanging on to life in a highly frightening position.

They were losing hope before the rescue, especially as they lay beside their friend and colleague, Dominick Pezzulo, who had been crushed to death. The moving flames threatened to overheat the cartridges in their pistols, threatening to fire at any moment.

They had been buried 9 hours before Thomas found them. He then climbed down into the burning ruins to save the pair of men, risking his own life, and rescued the men with only flashlights and an infantryman’s shovel.

For years, no one knew of Jason’s heroism

But then Thomas disappeared. For years, no one knew who this quiet hero was until a 2006 movie “World Trade Center,” when white actor William Mapother portrayed the character who rescued the film’s leading man, Nicolas Cage.

When Jason watched the trailer, he realized the story was about him. “That’s us. That’s me!” he said.

So he came forward, and revealed his identity to the world. Finally a documentary directed by British film-maker Steve Humphries aimed to tell the real story of Jason’s humble heroism: “I have researched the terrorist attacks for a decade — and made 12 documentaries about the aftermath.”

I have spoken to some amazingly heroic people — but this man is the most astonishing of them all.

“After his amazing rescue, Jason Thomas simply disappeared. He didn’t want any praise or publicity. He didn’t even want his wife to find out he had risked his life,” Steve continued. “By the time I caught up with him, he had five children of his own and he was living far away from New York, in Columbus, Ohio, and was working at the state’s Supreme Court.”

Revealing his identity was therapeutic

But, traumatized by the things he had seen, he had refused to talk about his incredible bravery for 12 years. Steve sifted through endless footage to find Jason, and finally saw a clip of him running toward the towers as everyone else fled in the opposite direction.

Jason, who is one of 18 children and the son of a preacher, said: “I didn’t know how much it was emotionally affecting my life, my marriage, my kids. It was something I thought I had tucked away without any problems bit it actually was causing a major problem.

Telling my story has been therapeutic because now I feel just glad that I was a part of it all.