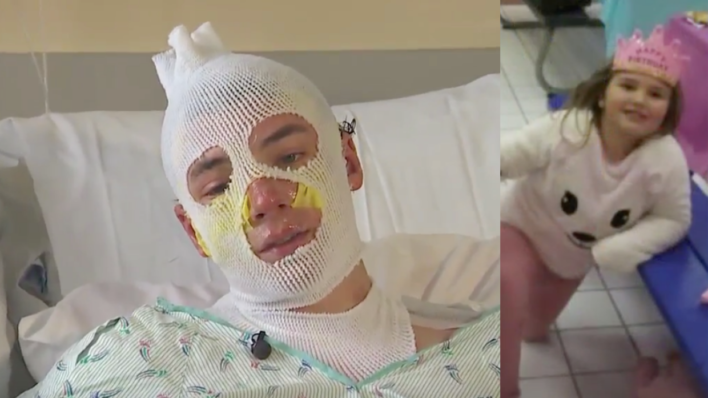 Heroic Uncle Rushes Into Burning Building to Save His Niece

Many people say they love someone so much they’d die for them – and a lot of them actually mean
By Aly Walansky    July 10, 2019

Many people say they love someone so much they’d die for them – and a lot of them actually mean it – but most of us don’t know what we’d do in that terrible situation until it actually happens. It’s all about the decision you make in that very moment.

That kind of life-or-death decision had to be made in a terrifying instant by a  young man from Washington State who ran into a burning home to rescue his 8-year-old niece.

He did rescue his niece, and got out alive – but paid a price

Derrick Byrd, at only 20 years old himself, now has severe burns to his face, arms, and back. But he has no regrets. He said he would run through the flames again – and even if he died himself, it’d have still been worth it.

The scary fire broke out Thursday morning at Byrd’s home in Aberdeen. His niece, Mercedes, and his two nephews, Junior and Rory, were trapped in a room on the second floor.

Byrd said he and his sister, Kayla, were able to catch the boys after they jumped out the window to get away from the flames, but his niece was too afraid to jump and begged her uncle to come in and get her.

“I just ran up the stairs and pushed through the fire,” he continued. “I could feel it burning me. I got her and took my shirt off and put it around her face so she wouldn’t breath in any smoke. And I just carried her out as fast as I could.”

Byrd and his niece both got out, and he’s right now in the hospital receiving treatment for his second and third-degree burns.

“Even though I got burnt, I really didn’t care,” he said. “I’d rather get burnt than her. She’s young. She’s still got a lot of stuff going for her. She’s a good kid.”

No one knows what true bravery is inside them until they have to summon it in one terrible, but lucky, moment.

This is one brave man — and very lucky little girl!

We can all learn from Byrd’s heroism in the name of family. It doesn’t need to be as extreme as saving your loved ones from a burning building, but you can easily be a hero to your family in a smaller way — by providing key support or advice to someone who needs it.