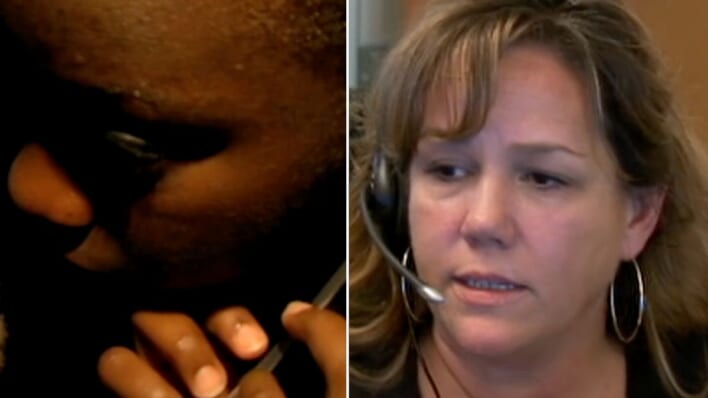 California-based teen Doyin Oladipupo survived the scariest moment of her life thanks to a 911 operator.
By Amber Dowling    September 20, 2022

California-based teen Doyin Oladipupo survived the scariest moment of her life thanks to a 911 operator.

Staying calm can be challenging when you’re faced with an emergency or put into a high-stakes situation. Yet quick-thinking and remaining calm may have saved one teen girl in California after intruders entered her home one fateful day.

Fifteen-year-old Doyin Oladipupo was home alone one day while her parents were both at work. Suddenly, she heard the doorbell ring, and the home security system’s alarm went off. She knew there was a problem. Thinking quickly, Doyin did everything she could to evade the people entering her home.

“I took off my shoes because I didn’t want them to hear me, and I grabbed [the] phone,” she told ABC News.

The teen then called 911 and hid in her parents’ walk-in closet behind some clothes. “I was so scared because I could see them. And I thought they were going to see me. They were just taking things from my mom,” she added.

Luckily for Doyin, the person she got a hold of at 911 was just as quick-thinking as she was. Angie Rivera had been a police dispatcher for 12 years when she answered Doyin’s call, and she used her training to remain calm and make Doyin feel like she wasn’t alone. She assured the girl the police and a helicopter were on their way.

When Rivera heard the intruders come closer to where Doyin was hiding, she instructed the teen to remain quiet and to tap “yes” or “no” answers into the phone instead of speaking.

RELATED: How a 24-Year-Old Victim Became the Hero Who Stopped the Real ‘Dirty John’ Meehaner

“My officers want you to know that your whole house is surrounded; you’re in safe hands, but just stay where you are,” she can be heard saying on the recording. She later explained to ABC News that she was trying to make Doyin feel as safe as possible.

“I tried to whisper as much as I could,” Rivera added. “When you’re talking to a child, the mother in me comes out.”

Minutes later, when the invaders left the home, they walked right into the cops waiting in the driveway. They were immediately arrested and later identified as three teens. Still, Rivera stayed on the phone with Doyin, ensuring she was okay until the very end.

“I was really happy with her,” Doyin explained. “She helped me a lot. If I was on the phone with somebody [else], I probably would have freaked out.”

“She was clearly frightened but remarkably calm,” one of the responding officers, Gary Wedge, later said.

As for Doyin’s parents? Her mother, Adebisi Jinado, told the outlet how she’s in awe of her daughter’s courage and ability to remain calm in what must have been the scariest moment of her life.

“My daughter’s strong,” she said. “I didn’t even know how strong she was, and the police told me what happened. She’s got an inner strength, and it showed.”

Hopefully you’re never in a situation like Doyin, but her story reminds us of the importance of staying calm when things get stressful. That’s the message Rivera drives home as well. That, and trusting and listening to the dispatcher if you ever do call 911, because they are trained for these situations.

If you think about it, stressful situations happen all the time in life, and not all of them are as intense as this one was. That’s why this story is also a good reminder that when you face an unexpected curveball in life, when things don’t go as planned, or when you’re unable to control a situation to get the outcomes you’d like, try and remain calm.

As Rivera reminds us, that’s the best way to think clearly and come up with those necessary backup plans in life.

Woman Traveling Alone Is Distressed When Car Breaks Down Late At Night – Then, 3 Teens Stop Next To Her