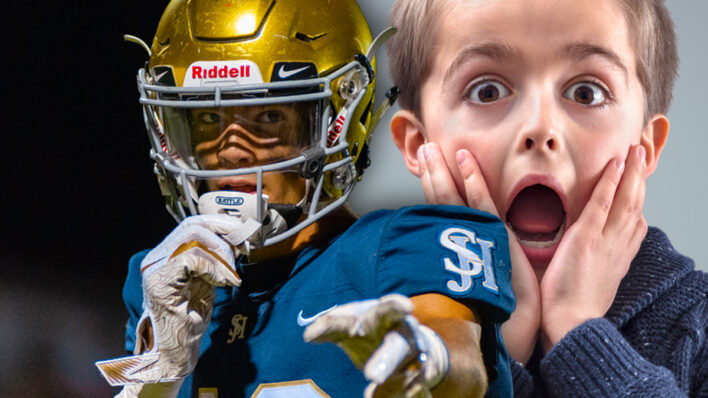 When a creepy stranger approached a young child, a team of high school athletes stepped in to provide their young new friend the ultimate defense.
By Sophie Babinski    April 18, 2022

When a creepy stranger approached a young child, a team of high school athletes stepped in to provide their young new friend the ultimate defense.

Kidnapping is a parent’s worst nightmare. And now, more than ever, mothers and fathers diligently warn their children of “stranger danger,” and encourage them to always speak up when an interaction with an adult seems “not quite right.”

These warnings have saved countless young children, and very well might have saved the life of one young boy in Michigan, who escaped from a kidnapping with his life!

How One Young Boy Escaped a “Bus Stop Boogeyman“

The middle schooler found himself alone on the street waiting for the bus one afternoon, and a bad feeling washed over him. Aware of his surroundings, he noticed a creepy older man heading towards him. The man was a stranger, and it was not normal for him to be walking the streets near the school at that particular time.

RELATED: 9-Year-Old Girl Is Almost Kidnapped at a Bus Stop – Only One Thing Saved Her Life

The middle schooler was instantly on alert. His parents had always taught him that he should never quietly accept something that did not feel right, and that it is always best to make a scene and try to get as much attention as possible when there is a feeling that danger is close by.

At the exact moment that the middle schooler was starting to panic, he noticed a JV football team was about to start practice within earshot. He started yelling for help, asking the football players to guard him and not to let the creepy stranger take him. The football players obliged.

“This little boy came in screaming and crying ‘Help!’ and then, this dude came up and he looked kind of creepy. The kid went behind me and said ‘Please don’t let him take me’, I’m like ‘We won’t, bud’. So we all tell him ‘get out of here, go away’”

The football players didn’t stop at just guarding their new friend. They sprung into action and recorded clues about the creepy man, including his license plate number, photos of his van, and an accurate description of his looks. They called 911 and provided all of the information they had, in case the man tried something else with another child in the area.

The young Michigan boy’s life may have been saved thanks to an amazing combination of street smarts and tips taken straight from the movies.

“You see what happens in a movie, so you take the experience from the movie and use it in real life.”

The football players and the boy worked together as a team to keep the neighborhood safe. While the players rejected the title of “hero,” it’s important to remember that small acts of courage and community service are always heroic, you don’t even need a cape!