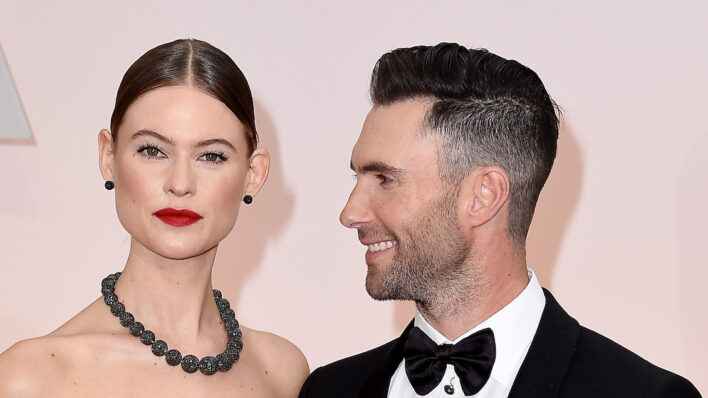 Adam Levine and Behati Prinsloo’s relationship may look conventional from the outside but the truth is, their beginning is far from your ordinary courtship.
By Barbara Pavone    September 25, 2020

Adam Levine and Behati Prinsloo’s relationship may look conventional from the outside but the truth is, their beginning is far from your ordinary courtship.

Adam Levine and Behati Prinsloo are one of Hollywood’s sweetest couples — just take a look at their Instagram feeds and you’ll see them unabashedly exchanging words of love — which makes the fact that they actually broke up before getting engaged seriously surprising. But as the Maroon 5 frontman and Victoria’s Secret model show us, sometimes, you really do need to part ways to see how much you truly want (and need) to be together.

Here’s what we can learn from Adam Levine and Behati Prinsloo’s sweet romance:

Adam Levine and Behati Prinsloo technically crossed paths for the first time in 2011 when they both worked on that year’s Victoria’s Secret Fashion Show. While Adam performed with Maroon 5, Behati worked the runway, but nothing came of it. Adam was dating another Victoria’s Secret model, Anne Vyalitsyna, at the time, which just goes to show that the right timing can be everything. Spoiler: When the two met for real a year later, sparks flew.

You can fall in love in many ways — even by email

In what is one of the most unexpected and unique love stories, Adam Levine and Behati Prinsloo fell in love by email. As the Namibian beauty told PORTER in 2019, they started talking in 2012 after being introduced by “a mutual friend. Adam was looking for a girl for a music video that could do some action stuff, and our friend was like, ‘You should meet Behati because she’s a total tomboy and down for anything,’ so he emailed me asking if I could do it,” she recalled. “I ended up not doing it, but we kept emailing each other.”

What happened next was truly surprising. “It was such a natural correspondence that we kind of fell in love over email,” she told the mag. And, luckily, that attraction transferred to the real world, too. “A month later, I went to LA for a job, and that was the first time we met in person. I remember walking in: I opened the door, and it was the classic moment where the light shines into the dark studio and everyone turned to look at me,” she continued.

He had boxing gloves on and he came to hug me – it was so awkward. Then he took me for dinner and we talked for hours and had the best time. It was love at first sight, it was crazy.

The details are unclear, but at some point in 2013, the couple actually went their separate ways. As US reported that May, Adam had been dating Sports Illustrated model Nina Agdal “since early spring,” which would place his breakup with Behati somewhere at the start of the year. A source close to Adam told the magazine that “Behati was in and out, but they finally ended it. It wasn’t an abrupt ending,” they added.

We broke up for two months, realized that it was the worst decision, then got back together, got engaged and got married. It was a wild ride!

Once they realized they were meant to be, the lovebirds moved quickly. In July 2013, a year after they started dating, they got engaged, then tied the knot in July 2014. Jump to September 2016 and they welcomed daughter Dusty Rose, followed by little sister Gio Grace in February 2018.

The right partner will always be there for you

Becoming a mom can be challenging and as Behati revealed during a 2019 interview on Today, she struggled following the birth of Dusty Rose. “I had moments of postpartum [depression] after our first baby,” she admitted. Luckily, she found strength right at home in the form of her partner. “My husband was so incredibly supportive and always got me out of it,” she said, adding, “I think it’s very normal, though, as a young mom and a new mom to feel helpless and to feel overly emotional, you know.”

As it turns out, Adam has been there every step of the way and is happy to share all parenting responsibilities. Calling her hubby “an incredible dad” and “very hands-on,” Behati told People in 2019, “He’s almost the stricter [parent] and I thought I’d be the stricter one. He kinda took it, and I’m okay with it,” she joked before gushing, “He’s so dedicated, he’s so excited. He’s on tour right now and he’s so sad to be away from them.”

It’s something the model doesn’t take for granted. “It’s so exciting to see your partner — you don’t know how they’re going to be as a parent and you two together,” she continued.

It’s amazing to see him really taking the role and loving it, especially with two girls.

They also support each other when it comes to their careers and it’s thanks to Adam that Behati was able to return to modeling with confidence, despite having two little ones at home. As she told PORTER, “I am so lucky [that] it’s easy to balance work and kids because my husband was born and raised [in LA] – he has a whole family here: grandparents, aunts, uncles, cousins.” She explained, “It’s really amazing to know that when I leave the kids for a day or two, they are surrounded with so much family.”

They really do admire each other a lot

They’ve been married for over six years, but Adam Levine and Behati Prinsloo’s love and admiration for one another is showing no signs of faltering. When Behati celebrated her 30th birthday in 2018, she was met with a heart-melting message from her beau on Instagram. “The Queen turns 30 today. She’s a legend. She’s THE baddest,” he wrote, adding, “In just a few years we have laughed and loved harder than most. I wake up every morning thankful that it wasn’t all a dream. Here’s to a thousand more years. I love you @behatiprinsloo with everything I got.”

Meanwhile, when Levine turned the big 4-0 the following year, his wife took to Instagram to share a sultry snap with the sweetest caption. “40 is just a number, but it looks damn good on you,” she captioned the photo of them kissing on a beach. “I wake up every morning more in love with you… Happy birthday to my WHOLE LIFE. You’re so cool, you’re so cool, you’re so cool.”

You never know when — or how — a meaningful connection might develop. It’s safe to say that when Adam Levine and Behati Prinsloo began emailing each other about work, they didn’t expect the digital correspondence to lead to a life-changing union. But it did. Which just goes to show that the universe will sometimes push someone special into your life by the strangest means possible and all you have to do is embrace it.