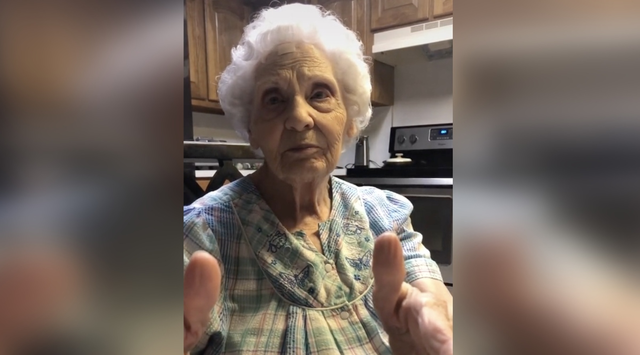 “What’s there to be scared of? This life is just a little interim time. It’s a blip.”

There’s a famous saying that there are two things in life that we can be sure of – death and taxes.

While you may somehow figure out how to avoid paying taxes, there is a one hundred percent chance that you won’t be able to avoid death. It’s coming for all of us, whether we want it to or not.

And while many of us are afraid of dying, one nonagenarian has figured out the secret to embracing the inevitable. And luckily for us, she’s sharing it.

At 98 years young, Nanny Faye has had more than a few trips around the sun. Born in 1925 she’s lived through The Great Depression, one world war, the Cold War, and more. She has known life both before and after the invention of television, Google, cell phones, and Rock ‘n Roll.

And in all those years of living, she’s gotten to know a thing or two about handling life’s many curveballs. With the help of her great-grandson, she shares stories of her life and nuggets of wisdom about living on her wildly popular TikTok account.

However, it was a question that one of her followers asked her about dying, that has, by far, gained her the most views. And for good reason. Her strong conviction about what comes next will reassure even the most skeptical among us.

Nanny Faye’s Powerful Take on Not Being Afraid of Death

TikTok’s favourite great-grandmother Nanny Faye took to her TikTok channel, @nannyfayeandme, to answer the burning question, “Are you scared of dying?”

In less than 2 minutes she sums up why none of us should be afraid of death and that it all comes down to faith. Not only does she talk about the afterlife but she also touches on just how inconsequential our time on earth is in the vast tapestry of existence.

In her sweet Texas drawl, she responds, “Noooo! Why should I be scared? Honey, what’s there to be scared of? This is just waiting for that. This [life] is just a little interim time. It’s a blip. It really is not going to amount to a hill of beans hardly… Less than 100 years up to eternity doesn’t even cut it.”

Nanny Faye goes on to say that people need to stop being afraid of death and start putting their faith in what the Bible says about eternity. “That Bible presents to you the most marvellous…place to live and to dwell and to be happy and to be perfect.”

We all know that life on earth is far from perfect, but Nanny Faye believes that it’s also just temporary. And when it ends, it’s really just a new, beautiful beginning.

“There is going to be perfection. Everything’s going to be lovely,” she says. “No sickness, no sorrow, no…people out of work, no trouble in any direction.” There’s not going to be any of that stuff that worries the tar out of us here.”

Nanny Faye’s unwavering faith and the power of her convictions have definitely struck a chord. Her video has garnered over 1.4M views, 162K likes, and more than 8K comments. Preach it, Nanny!

While her faith is inspiring, there’s also a lot to be said about the power it wields. It’s likely that the reason Nanny Faye has made it to 98 years old is, in part, due to her belief in heaven.

Research shows time and time again that faith is good for your health. It’s science. After reviewing over 1,200 studies, researchers at the Mayo Clinic concluded, “Most studies have shown that religious involvement and spirituality are associated with better health outcomes, including greater longevity, coping skills, and health-related quality of life (even during terminal illness) and less anxiety, depression, and suicide.”

So it would seem that Nanny Faye is on to something.

The reality is that not one of us is getting out of here alive. At some point, our time on this earth will end. And while the thought can be terrifying, finding peace in the inevitable can help us to live our lives to the fullest and make the most of the time we have.

Nanny Faye’s approach to death is a comforting one. Her willingness to embrace death and find peace in it is a reminder that death does not have to be feared. It’s just another part of the journey.