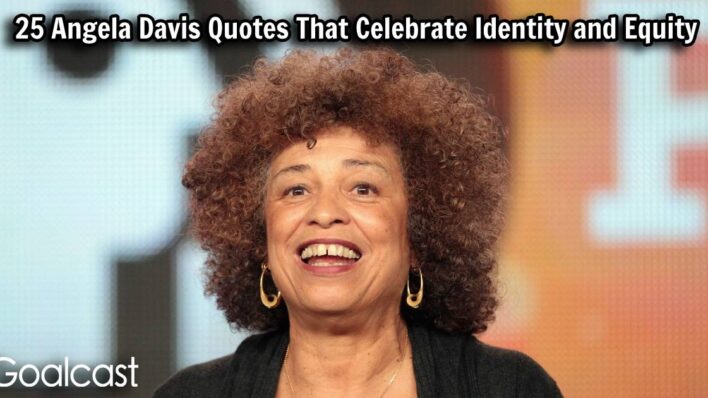 As an activist, Angela Davis remains an incon for courage, determination and justice. Here are 25 Angela Davis quotes that celebrate identity and equity.
By Flavia Medrut    June 22, 2020

As an activist, Angela Davis remains an incon for courage, determination and justice. Here are 25 Angela Davis quotes that celebrate identity and equity.

Born on January 26, 1944, in Birmingham, Alabama, Angela Davis grew up in ‘Dynamite Hill’, a middle-class neighborhood which was notorious for racial conflict. Its name was given after many African American homes in the area were bombed by the Ku Klux Klan.

Davis attended segregated schools and became an activist for civil rights from a young age. As a teenager, she used to organize interracial study groups, which were often broken up by the police.

Angela worked hard to transform a strict system and the rigid thinking of others. She spend her entire life traveling, lecturing, and teaching. She advocated for gender equity, civil rights and alliances across color lines, becoming one of the most influential and inspiring voices of the last century.

As part of her impressive work on prisoner rights, Davis co-founded Critical Resistance — an organization that aims to end the prison industrial complex. She has also wrote several books on race, class, and women’s rights, including Women, Culture & Politics.

To this day, Davis remains an icon for courage, determination and justice.

Here are 25 Angela Davis quotes that celebrate identity and equity:

You have to act as if it were possible to radically transform the world. And you have to do it all the time.

The process of empowerment cannot be simplistically defined in accordance with our own particular class interests. We must learn to lift as we climb.

No march, movement, or agenda that defines manhood in the narrowest terms and seeks to make women lesser partners in this quest for equality can be considered a positive step.

Revolution is a serious thing, the most serious thing about a revolutionary’s life. When one commits oneself to the struggle, it must be for a lifetime.

We have to talk about liberating minds as well as liberating society.

If we do not know how to meaningfully talk about racism, our actions will move in misleading directions.

It is in collectivities that we find reservoirs of hope and optimism.

In a racist society it is not enough to be non-racist, we must be anti-racist.

It is important not only to have the awareness and to feel impelled to become involved, it’s important that there be a forum out there to which one can relate, an organization- a movement.

Jails and prisons are designed to break human beings, to convert the population into specimens in a zoo – obedient to our keepers, but dangerous to each other.

Feminism insists on methods of thought and action that urge us to think about things together that appear to be separate, and to disaggregate things that appear to naturally belong together.

We should seek out all the doors which still remain ajar, however slight the opening might be.

But at the same time you can’t assume that making a difference 20 years ago is going to allow you to sort of live on the laurels of those victories for the rest of your life.

I don’t think we have any alternative other than remaining optimistic. Optimism is an absolute necessity, even if it’s only optimism of the will, as Gramsci said, and pessimism of the intellect.

I try never to take myself for granted as somebody who should be out there speaking. Rather, I’m doing it only because I feel there’s something important that needs to be conveyed.

I sank deep into the moment, husbanding this delight, hoarding it. For I knew it would be short-lived. Work. Struggle. Confrontation lay before us like a rock-strewn road. We would walk it … But first the grass, the sun…and the people.

It is easy to feel discouraged and simply let go. There is no shame in that. We are, after all, engaged in a struggle that seems, if we look at it using a mainstream political framework and through a mass media prism, unwinnable. On the other hand, if we take a step back, look at things from a broader angle, reflecting on what is happening all over the world and the history of struggle, the history of solidarity movements, it becomes clear, sometimes even obvious, that seemingly indestructible forces can be, thanks to people’s willpower, sacrifices, and actions, easily broken.

Well of course there’s been a great deal of progress over the last 40 years. We don’t have laws that segregate black people within the society any longer.

I think that has to do with my awareness that in a sense we all have a certain measure of responsibility to those who have made it possible for us to take advantage of the opportunities.

To understand how any society functions you must understand the relationship between the men and the women.

Sometimes we have to do the work even though we don’t yet see a glimmer on the horizon that it’s actually going to be possible.

You can never stop and as older people, we have to learn how to take leadership from the youth and I guess I would say that this is what I’m attempting to do right now.

Progressive art can assist people to learn what’s at work in the society in which they live.

I think the importance of doing activist work is precisely because it allows you to give back and to consider yourself not as a single individual who may have achieved whatever but to be a part of an ongoing historical movement.