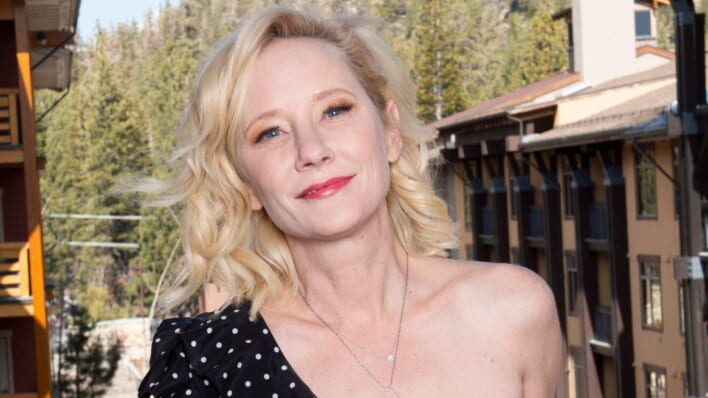 Anne Heche died on August 12 at the age of 53. She lived a remarkable life, fraught with tragedy, but remained true to who she was and who she loved.
By Amy Lamare    August 20, 2022

Anne Heche died on August 12 at the age of 53. She lived a remarkable life, fraught with tragedy, but remained true to who she was and who she loved.

On August 12, 2022, Anne Heche was declared legally dead as a result of injuries sustained in a car crash that happened on August 5th. The actress was only 53 years old.

Heche crashed her Mini Cooper into a house in the Mar Vista neighborhood of Los Angeles, causing the car and the house to catch fire. She never regained consciousness and was put on life support pending the donation of her organs.

Heche was a wonderful and talented actress, but her tragic yet inspiring personal life sometimes overshadowed her career. She was open about her mental health struggles and her substance abuse problems, making her a beacon for other people who have the same issues. She was fearlessly and ferociously herself, no matter how messy that person was at any time.

Heche was preceded in death by her father Donald and three siblings. She is survived by her sons, Atlas and Homer, her mother Nancy, and sister Abigail. While Heche was estranged from her birth family, she surrounded herself with a chosen family of friends who mourn her passing and celebrate her life and legacy.

Heche was discovered in 1985 at the age of 16 while she was performing in a play in high school. An agent got her an audition for the soap opera As the World Turns and she was offered the role, but her mother insisted she finish high school first. When she graduated, she took the dual role of Vicky Hudson and her evil twin Marley Love on the soap opera Another World from 1987 to 1991.

RELATED: Not Okay’s Danni Sanders Proves Why Cancel Culture Can Be Good

Her big breakthrough came in 1997 when she starred opposite Johnny Depp in Donnie Brasco. For the remainder of that decade, it felt like Heche was in nearly every film that came out. She starred in Wag the Dog, I Know What You Did Last Summer, and Volcano in the same year as Donnie Brasco. In 1998, she starred in Six Days, Seven Nights, Psycho, and Return to Paradise. Her career was humming along, and she was gaining traction as one of Hollywood’s go-to leading ladies.

And then it all came to a crashing halt.

As Heche’s career as a leading lady was taking off, she fell in love. And that cost her dearly because she fell in love with Ellen DeGeneres and came out as a lesbian. Back in the late 1990s, it wasn’t as easy to come out as anything that wasn’t heterosexual. When she went public with her relationship with DeGeneres, Hollywood blacklisted her. The prevailing thought was that she could not be believable as a woman in love with a man on screen if she preferred women off-screen.

Heche wasn’t even allowed to attend the premiere of her movie Volcano because the film’s producers did not want her walking the red carpet with a woman.

RELATED: Are You at Risk of Being Cancelled? Here’s Everything You Need to Know

Heche did not let this influence her. She fought to be able to love who she loved while also having a thriving acting career. She said, “It did not feel good. But what it also does, is to be able to give us a chance to be able to talk outside of the cancel culture. I was canceled. I was patient zero. I was the first one out. However, that storybook opened up,” she said. “What I was standing up for was the right to love who you want to love, period.”

Today, actors and actresses can declare they are gay, lesbian, non-binary, or transgendered and not face the same backlash as Heche. She played a big part in pushing Hollywood to accept LGBTQ people and forcing the industry to realize that who an actor loves in real life has no bearing on the roles they play on screen.

Heche was open about her demons and struggles with mental health, toxic relationships, and substance abuse. She was sexually molested by her father as a very young child and carried the scars of that along with the ones inflicted by her deeply religious family. Heche’s family life was rough. Her father was a closeted homosexual who was one of the first people in the U.S. to die of AIDS in 1983. He was also schizophrenic.

She said, “I think everything I’ve done in all my insanity was to try to get my parents to love me. My father loved movie stars. I decided I needed to become famous to get his love. My mother loved Jesus. That was her thing. So, I wanted to become Jesus Christ.”

Heche and DeGeneres broke up in the summer of 2000 after three years together, and Heche drove to a small town in Fresno County, California wearing only her bra and a pair of shorts. She entered the home of a stranger, who recognized her from her movies, and told the woman she needed to take a shower. The situation caused the homeowner to call the sheriff. Heche told the officer that came to the house that she was “God and was going to take everyone back to heaven in a spaceship.” She was placed on a brief psychiatric hold. She later admitted she had taken ecstasy, an interview on CNN revealed.

Heche wrote her memoir, Call Me Crazy, in 2001. On the book’s flap, she wrote,  “I believe that many people may think I went insane. I do not believe I am insane. I believe I went through a period of my life that was insane, and it lasted 31 years.” She has also said that she wrote the book to help others who might be experiencing the same struggles in life that she did.

Anne Heche Will Remain an Inspiration for Many

Anne Heche has been subjected to online hate and vitriol for much of her career and she still is in death. Online trolls have decided that only the best-behaved people deserve loving eulogies. No one is perfect, no human without their flaws, and it is shameful to direct hate and violence at someone like Heche who was always, unabashedly true to herself in all the good, bad, ugly, and beautiful moments of her life.

RELATED: Marvel Finally Revealed a Superhero as Queer in Thor: Love and Thunder – And That’s Crucial

Heche should be remembered for her honesty and her fights against homophobia and misogyny. This is a woman who should be celebrated for inspiring others to live their truths. She never sugar-coated how difficult her personal life was and in presenting those facts, helped countless others come to terms with their issues and difficulties. She was a powerful woman. Her light in this world will be missed.

In a statement to People, Heche’s son Homer said, “My brother Atlas and I lost our Mom. After six days of almost unbelievable emotional swings, I am left with a deep, wordless sadness. Hopefully, my mom is free from pain and beginning to explore what I like to imagine as her eternal freedom.”