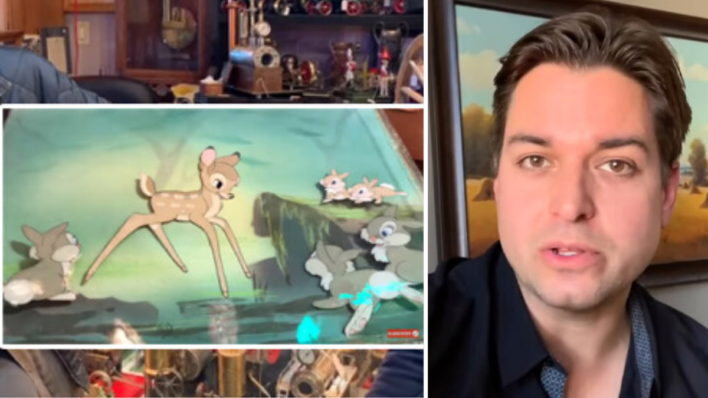 One antique dealer was shocked when the rare Bambi picture a homeless man had brought in was worth more than he anticipated.
By Sophie Tolias    June 22, 2022

One antique dealer was shocked when the rare Bambi picture a homeless man had brought in was worth more than he anticipated.

One day, a homeless man named Adam Gillian visited Curiosity Incorporated, an antique shop in Edmonton, Alberta, a shop that he had visited plenty of times before. But this time was different.

Gillian had found a ratty picture of Bambi, the Disney character, in a trash bin and brought it to antique dealer Alexander Archbold to get a few bucks.

At first, Archbold thought it was a replica of an animation cel from the 1980s or 1990s. He thought if he removed the broken frame and cleaned it, it might fetch $80 to $100. He paid Gillian $20 for the picture.

When Archbold took it out of the frame and flipped it over, though, he discovered a certificate of authenticity with a copyright date of 1937. “Bambi” hit theaters in 1942.

The Surprising Item a Homeless Man Brought to an Antique Store

Archbold realized he had an original Disney animation cel — a hand-drawn image on a celluloid sheet — and it was much more valuable than he had previously thought. So he vowed to give Gillian half of the proceeds.

He sold the piece on eBay for CAD $3,700. But he still had to track down the homeless man.

Archbold drove through the streets of Edmonton, slowing down wherever he saw homeless people and documented his search on YouTube. Eventually he found someone who knew Gillian and the man got word to Gillian who stopped by the antique store.

RELATED: Homeowner Kicks Homeless Man Off His Porch – Minutes Later, He Has an Unexpected Change of Heart

With cameras rolling, Archbold gave Gillian $1,600.35, his share of the sale after deducting fees. He also bought him lunch and gave him an additional $100.

“Wow, that’s awesome. I don’t know what to say. That’s cool,” Adam was seen saying to Archbold on the video.

The store owner says he empathizes with homeless people because he was once homeless.

“I was homeless when I was in grade seven. I had to help pay my parents’ bills so I had to sell antiques on the side,” Archbold said. “I go through people’s basements looking for stuff they don’t want anymore. Adam’s doing the same thing. He’s recycling and finding stuff.”

Archbold also set up a GoFundMe page to help Gillian get off the streets and into a hotel for the winter. The account quickly exceeded its $10,000 goal.

Meanwhile members of Gillian’s family saw news reports about his trash bin find and reached out to Archbold, who put the man back in contact with his family and helped him make plans to return home to Ontario.

Archbold even took a day off to help Gillian get a temporary identification card. But when he went to meet Gillian, he couldn’t find him.

I went to the hotel and I was supposed to pick him up, but he wasn’t there. He was tracking down a friend of his who was also homeless and was giving his winter boots to him.

When Archbold found Gillian he took him to antique stores to show him what dealers look for.

“He does have a talent for it,” he told CNN. “He always brought me neat stuff he found in the trash. I hope he sticks with it.”

When it was time for Gillian to head Ontario to reunite with his family, Archbold gave him a contact number for social services, a possible job lead, and a lunch his wife packed for the train ride.

“He’s a very kind, humble person so I’m sure he’ll have no trouble finding work,” Archbold said. “I’m rooting for him.” Everyone needs someone like Archbold rooting for them!