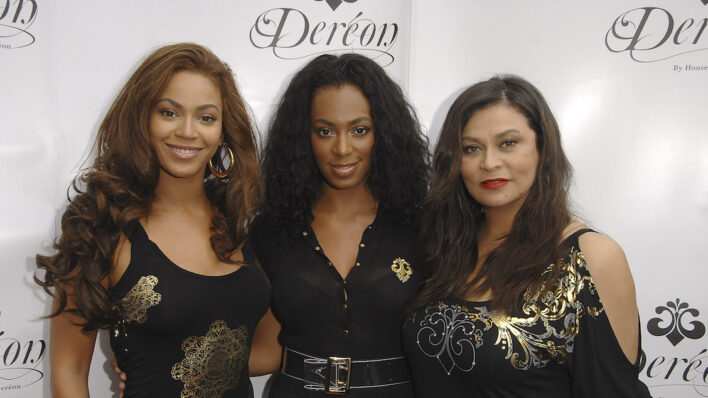 What Tina Lawson Can Teach Us About Raising Sisters, Not Rivals

Beyonce and Solange are both excelling in their respective musical genre. The secret of their tight-knit relationship resides in their mother, Tina Lawson.
By Shaoni Das    June 5, 2020

Beyonce and Solange are both excelling in their respective musical genre. The secret of their tight-knit relationship resides in their mother, Tina Lawson.

Beyoncé and Solange Knowles are one of the most dynamic, famous, and revered sister duos that have ever walked on the face of this earth. It may sound like we’re being a little dramatic but there is no denying that they make one hell of a pairing. It’s not just talent that has catapulted them to the top of the cultural zeitgeist; they’re hard-working, compassionate and self-confident women who are well aware of their strengths and weaknesses.

You don’t have to look too far to see that parenthood and their upbringing may have played a part in their success. While it’s important to note that many succeed in life despite harsh circumstances at home, others do so because they were raised by legitimate superheroes. Tina Lawson, the mother of Beyoncé and Solange, is one such superhero.

Tina had to be careful about raising two singing powerhouses in her home. As is the case with many artists, egos can fill up the entire room. Competition could’ve gotten fierce and rivalries could have forced the sisters to resent each other. However, the best parents raise their kids with equal measures of love, empathy, and discipline.

And Tina did just that. What could’ve turned into a lifelong rivalry and a game of petty jealousy among the sisters is now a relationship built on kindness, respect, and selflessness. You only have to hear Beyoncé and Solange talk about their mother to realize the immense role she’s played in their development as both artists and women.

Tina never prioritized one daughter over the other

In a conference on Summit 21, Tina spoke about how she used to divide her time equally among the two daughters. This means that neither Beyoncé nor Solange got more attention than the other. A lot of parents tend to pick favorites when deciding who they should be spending more time with but Tina knew that both her daughters deserved the full extent of her time and energy.

For example, Tina said that she would take time off work on Wednesdays to be with only Solange the whole day, helping her younger daughter out with homework and other similar tasks — that day was reserved for just Solange’s needs. And then Tina booked another day for Beyoncé. This alternating schedule ensured both Beyoncé and Solange received abundant care from their mother without her being distracted by the other.

It really works because it makes them feel [good] you know because kids, no matter how much you give them love and attention, it’s never enough. I mean I’m sure, everybody who has kids knows, you can take them to Astroworld, to eat, and they’ll still say, ‘Well what else we gon’ do?

But over the years, Tina began realizing that Beyoncé’s career was taking off very quickly. And so she felt like she had to do something to make sure the sisters did not lose sight of their pristine relationship. In an interview with Maria Shriver, Tina revealed that she took Beyoncé and Solange to a counsellor just as Beyoncé was becoming a star in their city.

My family was like ‘you’re going to make them crazy because they’re too young for you to take them,’ but I wanted Beyoncé to be sensitive to the fact that Solange had to deal with being a little bit in her shadow…It made her way more sensitive and protected and they’re still fiercely protective of each other.”

Tina Lawson on Architects of Change with Maria Shriver

Tina also said that while growing up, she’d always been under the impression that her own mother loved her older brother more. As a result, she didn’t want Solange to feel the same so she went above and beyond to get the sisters to realize that they had to protect each through all the ups and downs despite where their careers took them.

It wasn’t always easy. Beyoncé is five years older than Solange and the dynamic between the two sisters hadn’t always been the easiest thing to navigate. Tina revealed that as a young girl, Solange would always try to hang out with Beyoncé and her friends, which immensely irritated Beyoncé. But as they continued down the road of therapy, Beyoncé became more sensitive with regard to Solange’s point-of-view.

She taught her daughters to love themselves and their heritage

Tina herself has admitted to growing up incredibly poor, something she said made her feel ashamed for the longest time. Yet, through the sheer force of ambition and with a little bit of help from Matthew Knowles, the daughters’ dad, Tina was able to own and run her own salon in Houston.

Her attitude towards beauty was way more meaningful than the magic she worked on her customers in her salon. At each and every step of the way, Tina told her daughters that they were beautiful and their black culture was worth celebrating and appreciating.

My mother has always been invested in making women feel beautiful, whether it was through someone sitting in her hair chair or making a prom dress for one of the girls at church

Beyoncé to the New York Times

Beyoncé also said that Tina made certain the girls were surrounded by powerful, positive images of African and African-American art. Just so the girls saw themselves and their culture being reflected around them.

Even Solange agreed that their mom is a force of nature. She enabled the girls to focus on their intuition and express their emotions and ideas as best as they could. It seems like there was no hiding from Tina Knowles — she wasn’t just the master of her home but she also pushed her daughters to be their best selves and to use their voices fearlessly.

As far back as I can remember, our mother always taught us to be in control of our voice and our bodies and our work, and she showed us that through her example. If she conjured up an idea, there was not one element of that idea that she was not going to have her hand in. She was not going to hand that over to someone.

Solange on The Interview Magazine

And Tina’s efforts worked 100%. Not only are Beyoncé and Solange self-realized women who are proud of how far they’ve come in their careers but they’re also the biggest fans of each others’ work. In the Interview Magazine feature, Beyoncé repeatedly said that she is Solange’s biggest fan and that she’s super proud of her. Queen B also added that she knew early on that her younger sister was going to be something special.

Solange, in turn, is full of compliments for her older sister, who she referred to as a “master class” in their home while growing up. That’s how Solange was inspired to pursue singing, music, and art herself.

It all goes back to Ms. Tina, who’s a major collector of art, particularly art featuring African-American artists and subjects. She told Vanity Fair that her relationship with collecting historically or culturally significant art stems from a spiritual connection rather than a material one. And when she’s not admiring art, she’s managing wardrobe for Beyoncé. She’s even admitted to sewing clothes for Beyoncé in the nineties when very few designers would agree to dress a black, curvy woman. It looks like the Knowles clan is very talented in all departments.

The patriarchy has thrived over all these centuries because it inherently pits women against each other. That division begins at home, and many sisters do fall for this tactic; they become jealous of each other, they begin resenting each other’s successes, and ultimately they fall apart. But Beyoncé and Solange stuck the landing despite the challenges set in their way. And all the credit goes to their mother Tina.

She grasped the evolving situation very early on and knew that she had to do something immediately to keep the sisters from falling out. The tension was brewing but Tina evaded a drift by taking the girls to therapy and getting everyone’s’ feelings out in the open. Plus, she continually reinforced the importance of self-love and having pride in their black culture.

Tina Lawson teaches you that you can’t begin to love your family properly until you begin loving yourself. Being able to pursue your passion and using your voice to speak your truth is one of many ways in which you can practice self-love. Being aware and honest about your feelings is another way as that means you’re working to resolve them. Only then will loving your family come that much easier. Tina knew that the sisters had to love themselves first and foremost to build their sisterhood. And it worked: it indeed is a wonderful sisterhood we can all only hope to emulate.