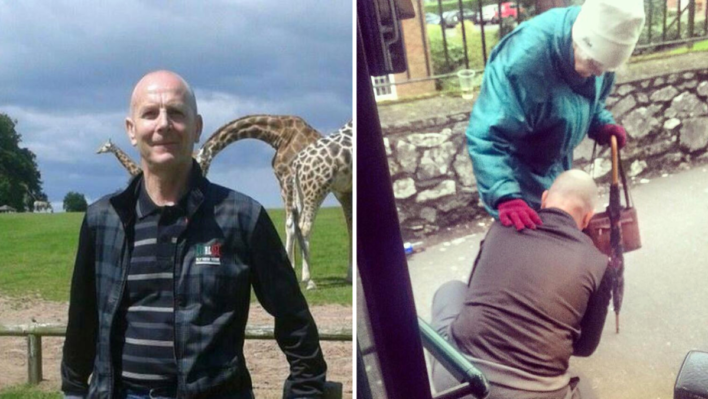 Clara Ní Bhriain was on the 205 bus to Kent Station when the driver, rather than making a brief pause at the stop, put his bus into park.

An elderly woman had just gotten off, tripping a bit over her untied shoelaces. When the driver alerted her to the fact that her shoes were untied, the elderly woman nodded slowly and said she was aware as she continued to get off the bus. That’s when the driver put his bus into park and followed her off onto the sidewalk.

The Reason Why a Driver Stopped and Got off His Bus

Clara watched as the bus driver said something to the elderly woman and then knelt in front of her to tie her shoelaces for her. Clara was so touched by the gesture that she snapped a photo and posted it to her Facebook page — a simple, good deed that had warmed her heart and which she hoped would remind others of the many good people in the world doing simple acts of kindness every day. She also sent it to the bus company, commending their employee for going out of his way to help a customer.

As the bus pulled away from the station, the elderly woman blew a kiss to the driver. Clara hadn’t seen someone do something so kind in as long as she could remember.

William Harris, the bus driver, went about the rest of his day, entirely unaware that Clara had taken a picture of him — or that it was going viral. To date, the photo has received over 91,000 likes, over 3,000 comments, and over 10,000 shares.

Soon, Harris’s siblings saw the photo: “That’s my brother!” One of them commented. Both noted how their parents raised them to be kind and respectful, especially to elderly people.

It didn’t take William’s wife Frieda long to see the picture, either. She called her husband to share the news, but William’s reaction was one of disbelief. He didn’t see anything extraordinary in his gesture; he was just doing what any decent human being should do.

He remembered helping his own mother put her socks and shoes on. For this elderly woman tripping over her shoelaces as she got off his bus, it was no different. It was the right thing to do to pause and help her before sending her on her way.

The story and picture shared on Facebook connected with tens of thousands of people. Some commenters shared their stories of other bus drivers who went out of their way to serve their customers. Some talked about a parent or relative who was a bus driver.

“It costs nothing to be kind, but it will be remembered for a long time,” wrote Maura Lombard.

Olive Monahan commented, “Let this be a lesson to us all if we were all a little kinder to each other showed a little more patience a little more understanding and compassion the world would be a far better one. Lovely lovely story and act of simple true kindness.”

RELATED: Bus Driver Sees a Mother and Her Disabled Daughter Struggling – So He Makes a Phone Call That Leaves Them in Tears

Still others said that they recognized this bus driver and knew him to be a kind, compassionate man. In a world where people are quick to point out others’ faults and shortcomings, it is so refreshing and uplifting to read about ordinary people doing ordinary things to make the world a better place.

May the lesson we learn from this story be that we can all make a big difference in the world by doing small things.