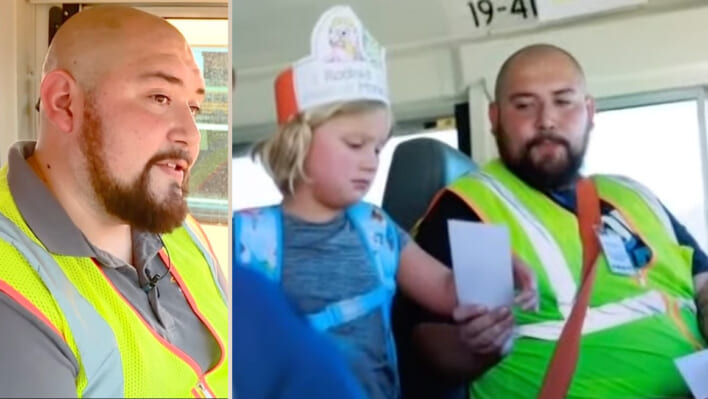 The man had an important and touching message that inspired everyone around him.
By Sophie Babinski    January 3, 2023

The man had an important and touching message that inspired everyone around him.

Bus drivers are usually the ones who bring us from point A to point B without much fanfare. When we think back to the people who stood out to us and inspired us throughout our time at school, we often think of teachers, not school bus drivers.

However, one school bus driver recently went viral for his contributions that went above and beyond the call of duty.

Not Your Average Bus Driver

School districts frequently underpay their school bus drivers, leading many of the best ones to leave the industry or work in the private sector. However, some people tough it out. Eric Jimenez has been driving a school bus in Idaho for more than six years.

RELATED: Frightened Mom Gets on Bus With 3 Kids – Teen Driver Jumps Into Action After Learning the Reason

He is committed to working for the school district because he feels that he has a chance to help the children of the future by spending his days with them and helping them get to school reliably. Eric has gone above and beyond as a bus driver since his first day on the job, and parents and community members alike have noticed.

An Important Message For Everyone

Cyndee Waynoni is one of the parents who has noticed Eric’s amazing attitude and impact. Her daughter Saleh rides Eric’s bus daily, and one day she came home carrying a letter. The letter started with a small introduction including his name and age:

“… I’m 31, married with no kiddos just yet, looking at fostering & adoption. I’ve been a school bus driver for 6 years and I’ve been in the field of youth development for about 12.5 years. One of my major values in life is to add value to everyone! Especially the youth on my bus, you are the future after all!”

The letter goes on to detail Eric’s goals, and then includes a touching message about what the youth he drives each day mean to him:

“I aim to create a culture of positivity, creativity & leadership development! To spark and ignite the flames of the inner leader inside you! To let you know that you matter, you are worthy, your voice makes a difference and can impact many! You are a world change! You were created for greatness with your powerful identity, abilities & talents! A major goal this year is to promote joy, positivity and gratitude. Especially living in a negative and fear driven world over the past couple of years, we must rally together and push beyond the struggle of negative mindsets! I’m a firm believer on the topic of “what you focus on, grows!” So let’s focus on the good, wherever it can be found and grow ourselves in the process! I look forward to our adventures this year on the bus!”

Cyndee was so touched and impressed by Jimenez’s letter that she shared it with local news station KTVB. The station posted the story on their Facebook page where it was immediately shared hundreds of times. Many local parents commented on the post, sharing the impact Eric had had on their own children as their bus driver.

Eric was humbled when he found out that his letter had gone viral.

“I’ve done it for about five years now, just creating that positivity in a space where, I don’t know where these kids are coming from, what home life is like, and if I can be that adult that can create that safe space for those kids,”

RELATED: Miami Bus Driver Notices a Struggling Passenger – What She Does Next Makes Headlines

Eric went on to tell the TV station that he feels like driving the school bus is his calling. From that position, he can help accomplish so many of his goals, including helping to eliminate bullying in his district, protect children in need, and support families who are spread thin by looking out for their little ones.

Parents love Eric Jimenez because he looks out for their children and models a passion for what he does– which is priceless! The children who see him every day see a man who is happy and doing what he loves, following his passion and living with integrity.

There is nothing better than that. We should all follow Eric’s example and inspire those around us while accomplishing our goals. What an amazing example!