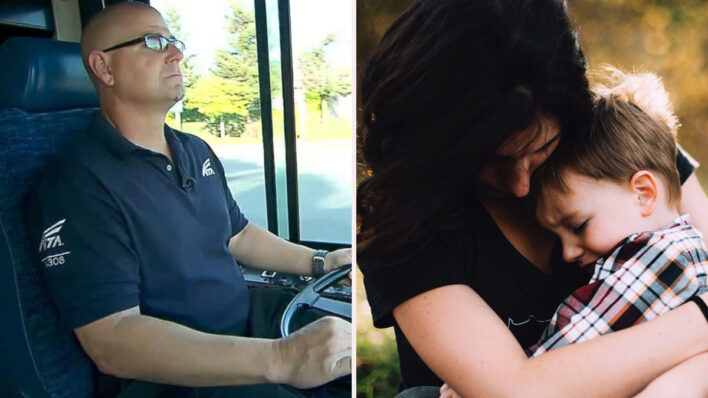 A quick-thinking bus driver helps stop a kidnapping in progress on his bus.
By Sophie Tolias    April 25, 2022

A quick-thinking bus driver helps stop a kidnapping in progress on his bus.

A 3-year-old boy a boy went missing from the children’s section of a public library in California, while visiting with his mother.

When police searched the library, they couldn’t find the child but instead got a description of a man seen leaving with the toddler. An alert went out identifying the two in hopes someone would spot them.

RELATED: 9-Year-Old Girl Is Almost Kidnapped at a Bus Stop – Only One Thing Saved Her Life

Meanwhile, Tim Watson was driving his bus route in neighboring Fremont, California, and thought he saw a child matching the description aboard his bus.

What I pictured in my mind was the parents in front of the cameras asking for their child to be brought back home.

Watson, who is a father, didn’t want to put the child in danger and devised a ruse to get a closer look.

“I pull over and I hit the brake and I say I’m looking for a green backpack, so I wanted to observe the young man and see if my description meets my criteria on my sat com,” Watson told KTVU.

There was no green backpack. But Watson did see red shoes on the toddler’s feet and plaid shorts, both of which matched the description of the abducted boy. Confident he’d found the child, he made the call and police sprung into action, meeting the bus at the Fremont BART station.

Officers confronted Alfonso David Edington, 23, as he exited the bus and pried the child away.

Watson asked a police officer what happened, and when he learned it was an abduction, the bus driver admitted he lost it. “I became very emotional. This could have been my child that was abducted, he told ABC News.

RELATED: A Young Boy Almost Kidnapped by a ‘Creepy’ Man Is Saved by a High School Football Team – Here’s What Happened

“What if I didn’t read that message until I got to Fremont BART?” he continued.

“The family is extremely emotional,” Milpitas Police Chief Steve Pangelinan told KTVU, but by all appearances the child was unharmed. “The bus driver is a hero. Absolute hero,” Chief Pangelinan confirmed.

The Power of Paying Attention and Trusting Your Instincts

Watson said he just followed his paternal instincts. “I feel I did what any father would do,” he told ABC News. Most parents would agree; when hearing such horrifying news as a kidnapping, mothers, fathers and legal guardians of any description tend to prickle, and keep a keen eye out for suspicious activity.

But Watson also reminds us to follow our instincts and stay calm in an emergency situation like the one he handled. Noticing is one thing, but acting with poise is another thing entirely.

be observant
Staying aware of your surroundings and raising your voice if something doesn’t seem right could potentially save a life.
Tags
Share
← Prev Post Next Post →