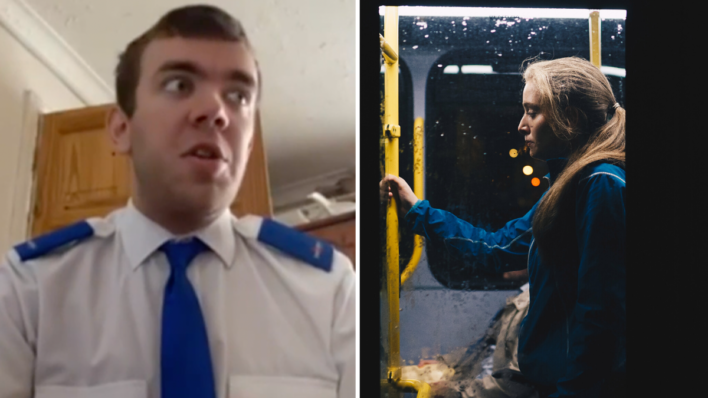 An 18-year-old bus driver went out of his way to help this scared family.

Kyle Caswell was only six months on the job driving a bus in Swindon, England, when he faced an unexpected situation. His training had prepared him for many things, but what he wasn’t expecting was a scared family to approach him one night.

The Reason Why a Scared Family Got on a Bus

Caswell was just finishing his route when an upset woman and her three children ran towards the bus stop. According to ITV News, the family got on, and the driver completed his route. Then, Caswell realized the mother and her kids were trying to escape an “ex-boyfriend who was quite violent.”

After speaking with the woman, the driver knew he couldn’t just leave the vulnerable family or drop them off near where the man might be looking for them.

“So, I rang my supervisor and basically said, ‘Look, I’ve got a lady and her three children here; they’re in danger because of a violent ex-boyfriend. Can I take her out of service to where she needs to go because I’m not going any further?'” he recalled to the publication.

After getting the go-ahead, Caswell then dropped the family off at a relative’s home.

How a Bus Driver Went Above and Beyond for His Passengers

“We are all very proud of Kyle. He acted with maturity and humility,” operations manager Paul Coyne told ITV. “We know we have excellent drivers, but we also look for the ability to provide great customer service when we recruit new colleagues. Kyle is the epitome of that, and he is very worthy of the praise he has received.”

That praise may make Caswell slightly uncomfortable, however. “I was just doing my job, really,” he said. “If I can keep people safe and make sure they aren’t in any danger, then that’s my job done.”

Since then, Caswell also notes he has had people reach out to him on social media, sharing stories of times they’ve been in similar situations and thanking him for acting with compassion. Caswell says any driver would do the same in that situation, all anyone has to do is ask.

How One Bus Driver Proved the Importance of Asking for Help

When we’re in danger or a difficult situation, we don’t often think of bus drivers as a place to turn to for help. However, Caswell’s story is a good reminder that bus drivers are a part of the community, and it is their job to help others in need. Whether you take the bus or have a teen or friend who does, maybe remind them of that.

Caswell’s story is more inspiring than that, however. His actions remind us that when we see someone in need, asking them if they are okay or need help is essential. Sometimes people don’t know how to ask for help or are scared.

Whether it’s a stranger, a friend, or a family member who appears in distress, asking questions and offering help in whatever form you can goes a long way in helping people feel safe, secure, and even loved. After all, if we were in a challenging situation, we know we would hope someone would do the same for us.

Driver Allows Teenage Subway Employee With Only 65 Cents to Get on the Bus – Then, She Shows Up at His Work