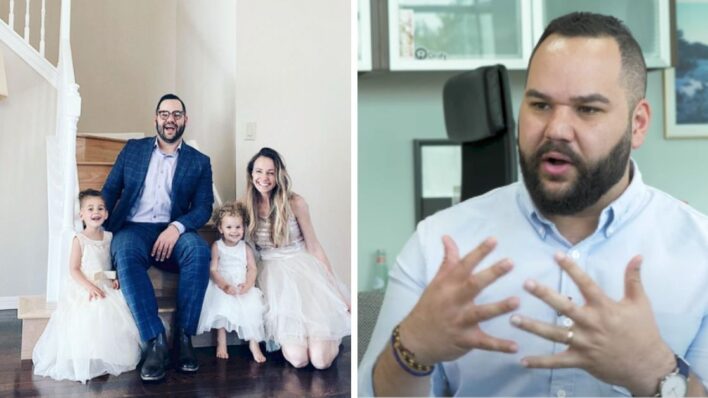 Busy Father Has A Major Wake-Up Call During Lockdown

Marcus Murphy had a major realization when the COVID-19 lockdown forced him to spend time with his family at home. This is his powerful story.
By Aly Walansky    June 16, 2020

Marcus Murphy had a major realization when the COVID-19 lockdown forced him to spend time with his family at home. This is his powerful story.

Many of us can easily get tangled up in the realities of our professional lives–whether we need to make money or we are simply driven by ambition, work can make us forget about. It seems more important to them than anything else. Until, of course, something happens to change how they look at everything.

Marcus Murphy was one of those people who was so wrapped up in his work, that he was unknowingly missing out on an important part of his life: his children’s growth.

Marcus’ work required him to be on the road almost 300 000 miles per year– a considerable distance. As the the head of partnerships for a company called DigitalMarketer, his work required a lot from him. When COVID-19 struck, his routine was flipped upside down.

“It was hard to turn it off,” he told Good Morning America. “I was usually up and out the door early to catch a quick run, then home with enough time to grab a shower, coffee and my backpack. I would rarely see my girls unless they happen to get up early, and if I did, it would be a quick smooch, some sad ‘I miss daddy’ tears, and off I went.”

Murphy shared his reflections in a now-viral LinkedIn post.

Left to my own devices I would 100% work myself out of a great marriage, amazing children, and good health.

Marcus was torn between two voices

Marcus’ inner conflict is something many fathers can relate to. In our world where being busy is almost a cult, and where parents want to do what’s best for their children, it can be difficult not to experience inner conflict.

I knew that I was missing out on something huge but there was another louder voice telling me I was doing it ‘for them.’

During the lockdown, Marcus finally came to the realization that he had been lying to himself all along.

“That voice has grown silent over the last few months and it’s put the ‘lie’ on full display,” Marcus wrote. “The sobering reality [is that] that they needed me, not my ambition. I’ve honestly had a lot of sleepless nights over it these last few months. Praying that my decisions early in their lives won’t have a lasting impact.”

The tricky side of success

Success, Murphy said, is “a tricky thing.” It had blinded him to the people he loved the most, his children and wife.

As I saw more of it I saw less of them.

The lockdown not only brought this major realization, but it also changed his family. For example, his daughters are growing more mature and courageous before his eyes. “As I’ve spent more time with them I’ve seen them take more risks,” he said.

“I think I started to believe the lie that my girls were ‘fine,’ that I didn’t have a lot to offer at such an early age. Believe me, being home hasn’t been perfect. I still take calls in my home office and look up at a clock and say ‘that can’t be right,’ but I’m welcoming the interruptions, I’m appreciating the moments when I can just sit on the ground, put down my phone and play with blocks.”

Marcus made a crucial decision

He’s also establishing a new normal and has found out a major aspect of parenthood that his previous absence never allowed him to notice.

Your children are always watching. You’re teaching whether you like it or not.

Murphy said he plans to leave his current job to start his own company.

“I will always be a hard worker but never again at their expense,” he told GMA. “I want to take my girls with me on this journey. I want to create a life that requires them to be in it. I want them to stand with me in every green room, board room, and meeting but more importantly, I just want them.”

Take the time to appreciate the people who matter to you

Marcus’ realization is a universal one. Whether it is parents or kids, or just friends who are just as important as family, our daily lives can easily distract us from the people we love. While lockdown has been difficult on a lot of people for various reasons, it has also provided us with the time to re-evaluate our previous routines and prioritize what matters to us.