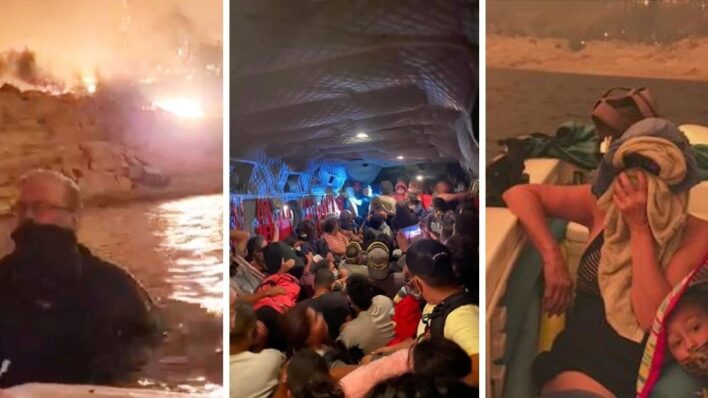 Over 200 people were saved from what could have been a certain death by a heroic helicopter crew that refused to give up in the midst of the Californian fires.
By Kawter    September 13, 2020

Over 200 people were saved from what could have been a certain death by a heroic helicopter crew that refused to give up in the midst of the Californian fires.

By now, many are aware of the destructive and deadly wildfires ravaging northern California turning the region into a nightmarish vision. So far, they claimed the lives of 24 people and caused significant damage to infrastructures and wildlife.

The fires moved so fast that it took many by surprise, including over 200 people who were in Mammoth Pool in the Sierra National Forest. Dennis Drake of Lake Elsinore was there for Labor Day weekend with his brother and family and he never thought his vacation would turn into a nightmare.

Watch this Goalcast video for a boost of inspiration:

At first, they saw smoke in the distance

The first signs of the devastating fires were minimal. Initially, Dennis and the rest of the vacationers only saw smoke in the far distance. “We got into our side-by-side and went for a look,” he tells Fox 26 News. “It looked like, 50 miles away.”

Yet, they underestimated the speed at which the fires were spreading. After only a few hours, the situation became critical.

We were almost completely surrounded by fire. Almost 360 degrees.

On Saturday morning, the flames had only covered about 2000 acres–by Sunday evening, the number had reached 73 000.

They tried to escape–but there was no way out

So Dennis, his brother and his brother’s family decided to drive away. Unfortunately, there seemed to be no way out. The fires surrounded them.

There’s fires on both sides of us, we have no protection.

Along with the other vacationers, they found refuge in a large body of water–the reservoir. “The reservoir at that point was about 40 feet down below full capacity. We know we have gravel, rocky area that’s not gonna burn,” Dennis said.

They tried dipping themselves in the water to withstand the intense heat and smoke. “We’re dunking every 10-15 seconds, just trying to survive.”

The search for the vacationers could have seemed impossible under such terrifying conditions. With the thick smoke and the flames, they would be difficult to locate–let alone be saved.

But the Army National Guard helicopters did not give up.

“As you can imagine, the terrain up in that area is extremely rugged. A lot of trees, we don’t know where people are,” said Colonel Dave Hall, Commander of the 40th Combat Aviation Brigade.

The technology on board of the helicopters made all the difference, as Hall said. “It’s a lot easier for us to see the heat sources and the fire, sort of see through the smoke at nighttime with the night-vision goggles,” he added.

Part of the crew consisted in members who had recently returned from military deployment overseas. For them, this local rescue mission was also a mission of hope.

Every seat was taken

Colonel Hall reports that Chinook Helicopter and a Black Hawk Helicopter were able to save every single person by doing three trips each. For some of those, they were filled to capacity, up to 60 passengers.

Normally, filling them to capacity is not an ideal situation.

“It was pretty cramped tight in there. We do not like to operate that way, but because of the circumstances of this being an urgent situation threatening life, the pilots in command made the smart decision by loading them to get on the helicopter and loading as many as they could on that lift,” Hall tells Fox 26 News.

Dennis describes the feeling of being carried to safety.

Where there is a will, there’s a way

Dennis and the rest of the survivors were carried back to safety where ambulance crews awaited them. What could have been a deadly weekend turned into an incredible story of heroic perseverance.

“They deserve respect. Absolutely, each and every one is heroes,” Drake said. “Everyone I saw, I shook their hand, thanked them. Mainly because of the fact if it wasn’t for them. I wouldn’t have made it out.”

The Air National Guard didn’t give up despite the extremely difficult conditions that worked against them. They proved the old saying, where there is a will, there’s a way.