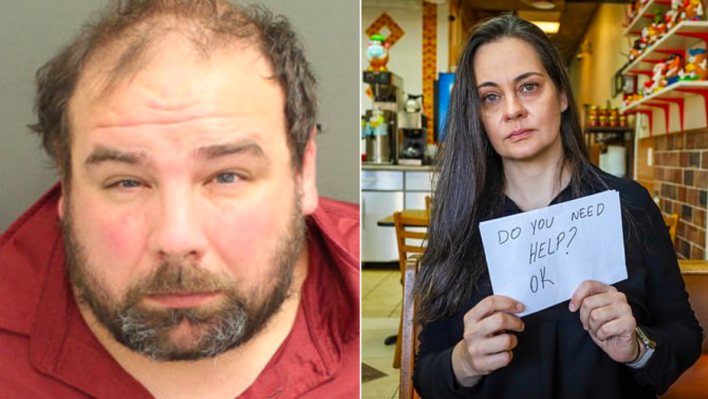 If you see something, say something. You may save a life.

Flaviane Carvalho had no idea that she would become a hero that night. She wasn’t even supposed to be there, and she was just about to leave. But a gut feeling told her something wasn’t right.

Carvalho worked at Mrs. Potato Restaurant in Orlando, Florida. When a colleague called in sick, she offered to pick up the extra shift. Nothing special had happened that day, and Carvalho’s shift was almost done, when a family of four came in and sat down in her section.

A Suspicious Group Sits Down

They were the last customers that night, so Carvalho was able to give them her full attention. She brought them menus, right away noting the sullen, elementary school-aged boy slumped in his chair. Even though he kept his head down and was wearing a baggy hoodie, glasses, and a face mask, she could see bruises on his face and arms.

When the family ordered without getting anything for the boy, Carvalho was on edge. When they wouldn’t let him eat or drink anything that she brought, she knew something was wrong. His parents insisted he would eat when they got home, but Carvalho had never known a parent to bring a child to a restaurant and not let them eat. But what could she do?

“He was scared, and I was scared, too,” Carvalho remembers. But then it hit her: the table that the family was seated at was perhaps the only table in the restaurant where she could get a message to the boy without alerting his parents.

She returned to the kitchen to grab paper and a black marker. On the paper, she wrote, “Are you ok?” She held up the paper so that the boy could see it but the rest of his family could not. The boy shook his head slowly, so Carvalho mustered the courage to try again. She grabbed another piece of paper and penned a new message: “Do you need help?” The boy hesitated before nodding.

The Police Arrive on the Scene

Carvalho sprung into action. She told her boss about the situation and then called 911. The police arrived at the restaurant within minutes. Their evaluation confirmed Carvalho’s suspicions. The boy was being abused. She had only seen a few bruises, but he was actually covered in bruises from head to toe.

Not only did his parents refuse him food that night, but the boy was a full 20 pounds underweight because he was often deprived of nourishment. Later, he would tell detectives that his stepfather hung him upside down from a door frame by his ankles, and that he was hit all the time, sometimes with fists, other times with a wooden broom. His mother knew about the abuse but didn’t contact the authorities.

The police arrested the boy’s parents on the spot and charged them with multiple accounts of aggravated child abuse and child neglect. “This could have been a homicide situation,” said the Orlando Police chief.

He commended Carvalho for trusting her gut and acting on the child’s behalf. Abused children rarely feel empowered enough to seek help on their own. Carvalho’s simple and straightforward questions to the boy allowed her to confirm her fears and gave her the courage to act. She effectively saved the boy’s life. His little sister was also removed from the family’s home.

When news spread of Carvalho’s motherly instincts and courageous action, she began to receive flowers and gifts. A GoFundMe page was even set up to support and reward the community hero. To date, the fundraiser has amassed over $60,000, far surpassing its $10,000 goal.

But Carvalho insists that she just did what anyone else would have done in the face of such a troubling situation. She decided to use some of the money to help more children. She wants to start a nonprofit organization to educate the public on warning signs of child abuse so that everyone can feel empowered to take action.

On her birthday, a few weeks after the incident, Carvalho found out that the boy was now living in a safe and loving foster home. “I’m super glad,” she gushed. “I’m happy for him. It just warms my heart that now he has a better chance in life and he’s being treated well and feeling love and being taken care of.” Those things are indeed the right of every child, but sadly, not the always the reality.

Carvalho also gave another update on the story on the GoFundMe page: “Justice served!! Yesterday was the day of the aggressor’s trial. He was charged with 10 crimes, now he will spend the rest of his life in prison because he was sentenced with 2 life sentences.” She also said that the boy is happy and healthy.

Carvalho didn’t let her fear that night stop her from doing the right thing. The International Center for Missing and Exploited Children bestowed on her an Everyday Hero Award, commending Carvalho for making the world a safer place for children.

If you see something, say something. You never know. You may save a life.