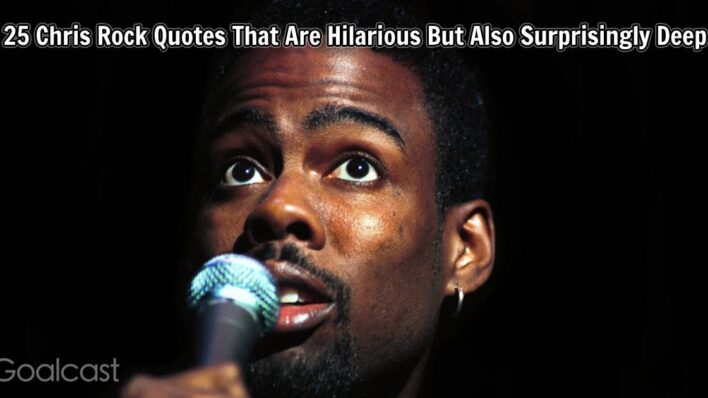 25 Chris Rock Quotes That Are Hilarious But Also Surprisingly Deep

Hilarious and unapologetic, Chris Rock is an American comedian, actor, producer, and director. Here are 25 Chris Rock quotes that are blunt but true.
By Flavia Medrut    March 3, 2020

Hilarious and unapologetic, Chris Rock is an American comedian, actor, producer, and director. Here are 25 Chris Rock quotes that are blunt but true.

Chris Rock is an American comedian, actor, writer, producer, and director. Hilarious and unapologetic, he never misses a chance to tackle sensitive subjects and reveal their humorous aspects.

Chris was raised in an impoverished section of Brooklyn and attended a public school. As a result, he was often subjected to discrimination, a social problem that greatly influenced his comedic work.

The comedian played small clubs before he was discovered by Eddie Murphy. Ever since then, Rock’s career has been on the rise and came to wider prominence after he earned a spot as a cast member of Saturday Night Live.

Having nothing to hide and a lot of stories to tell about his early life, the comedian wrote and narrated the sitcom Everybody Hates Chris. For being innovative and evidently funny, the American Film Institute selected it as one of the best 10 television series of 2007.

Rock’s raw humor and uninhibited nature earned him respect as well as controversy. He is well-known for dropping truth bombs, but since they’re delivered in a hilarious way, it appears that everybody loves Chris after all.

Here are 25 Chris Rock quotes that are blunt but true:

Listen to people that are smarter than you.

You can only offend me if you mean something to me.

With the new day comes new strength and new thoughts.

Put your heart, mind, and soul into even your smallest acts. This is the secret of success.

When I hear people talk about juggling or the sacrifices they make for their children, I look at them like they’re crazy because ‘sacrifice‘ infers that there was something better to do than being with your children.

I think it’s better to have ideas. You can change an idea; changing a belief is trickier.

The fear of death follows from the fear of life. A man who lives fully is prepared to die at any time.

Funny is only something that others know about you — you can’t be funny by yourself.

When you meet somebody for the first time, you’re not meeting them. You’re meeting their representative.

You can be anything you’re good at.

Only dumb people try to impress smart people. Smart people just do what they do.

No matter what happens or how difficult things become, you will eventually feel better.

Anyone who makes up their mind about an issue before they hear the issue is a fool.

Everything’s funny — in the right context and done by the right person.

There are only three things that women need in life: food, water, and compliments.

Oprah is rich, Bill Gates is wealthy. If Bill Gates woke up tomorrow with Oprah’s money, he’d jump out a f***ing window and slit his throat on the way down saying, ‘I can’t even put gas in my plane!’

Gun control? We need bullet control! I think every bullet should cost 5,000 dollars. Because if a bullet cost five thousand dollar, we wouldn’t have any innocent bystanders.

Comedy is the blues for people who can’t sing.

People are always going to, you know, find something wrong with people who are not the exact same as them. That’s just what it is. Black, white, short, tall, religions, whatever. People are bad.

I used to work at McDonald’s making minimum wage. You know what that means when someone pays you minimum wage? You know what your boos was trying to say? ‘Hey if I could pay you less, I would, but it’s against the law.’