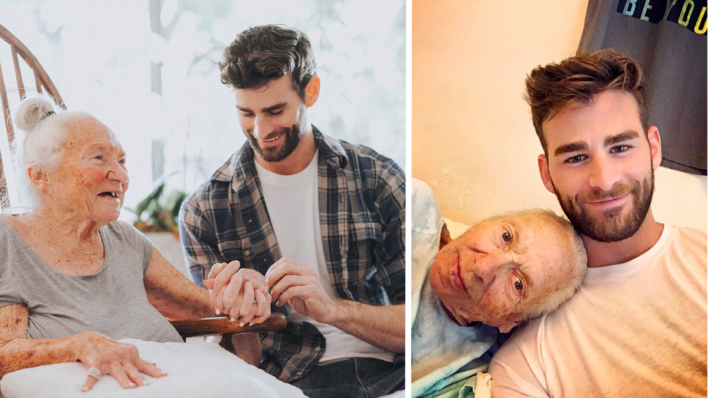 One man’s act of kindness helped his octogenarian neighbor find a new home and a best friend at the same time.
By Joel Balsam    December 2, 2021

One man’s act of kindness helped his octogenarian neighbor find a new home and a best friend at the same time.

Their friendship started when Cook would wave to Salvatore when they were living in the same West Hollywood apartment complex, CTV News reported in the 2017 story.

One day, Cook tried to start a conversation with Salvatore, but he couldn’t make out what she was saying because of her asthma. So, he went inside and had a glass of champagne.

I just came in and she offered me a glass of champagne and we sat and chatted and we hit it off right away.

Throughout the years, Cook offered the shoulder Salvatore would cry on when he went through a bad breakup.

“She would share her advice and her wisdom with me,” he said. “I was going through my own issues with the breakup and stuff and she snapped me right out of it.”

The two even made YouTube videos together and accumulated a decent following.

Taking care of one another

But Cook’s health deteriorated and doctors said she couldn’t continue to live on her own. Instead of allowing Cook to go to a nursing home- something she didn’t have money for in the first place- Salvatore launched a fundraiser so she could move in with him.

All in all, Salvatore raised more than $77,000 to take care of his best friend.

“Living alone I was lonely,” Salvatore told CTV. “It’s been really nice. We’re so close that we spend every waking moment together now.”

Salvatore said his friendship with Cook has been “life-changing,” and that it’s a lesson for everyone about the power of kindness.

I really do believe that kindness heals.

“I hope it inspires people to go out there and be kind to one another and show up for people who need help,” he added.

In North America, we so often leave our elderly alone in the twilight of their life- something that has sadly been emphasized during the coronavirus pandemic.

What Salvatore did was an extraordinary level of kindness, and it’s certainly too much to ask that everyone will invite their elderly neighbors to live with them. Although Norma Cook sadly passed away in 2017, Chris’ story proves the importance of being kind to the elderly and treating them with the level of care we hope to receive at that age.